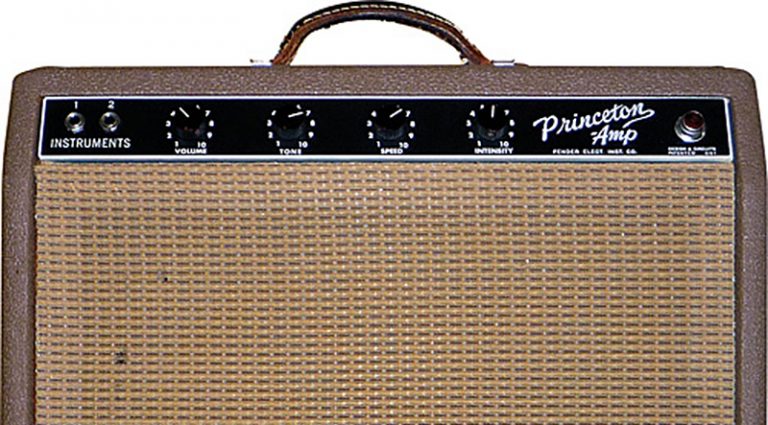 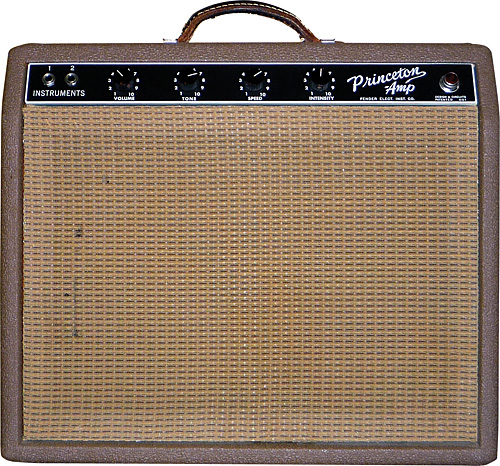 For the past couple decades the Fender Deluxe of the ’60s and early ’70s – in its several variants – held the title of “favorite small vintage combo.” Lately, however, the smaller Princeton has finagled its way into that position. Whether this is a factor of the continuing decline in stage volumes tolerated at smaller venues, or simply one of a growing recognition of the Princeton’s singular sonic virtues, is difficult to say. Either way, the trend behooves a look at a lesser-seen “tweeny” of a Princeton that offers a slightly alternative flavor from this popular menu.

While it isn’t always entirely accurate to describe the brownface/tan-Tolex amps of 1960-’63 as “somewhere between a tweed and a blackface,” this ’62 Princeton fits that billing rather well. In this case, though, the 6G2 Princeton circuit is perhaps closer to the 5E3 Deluxe in several ways (including tone) than it is to its single-ended tweed forebear, or it would be if not for its rather underpowered 10″ speaker.

In 1960, the Princeton went from being the larger of the beginner’s bedroom amps in the Fender lineup to being the smaller of the performance amps. With two 6V6GT output tubes in push/pull fixed bias for a robust 12 watts, it was suddenly too loud for the average kid’s bedroom, but graduated successfully to the basement or garage, where it could hit the sweet spot perfectly with a couple pals on drums and bass. This is the status the brown Princeton maintained for many years – underrated as a performance amp compared to the versatile Princeton Reverb, long a studio favorite of many pros – and it’s a situation for which any player likely to have acquired one lately can be thankful. Like our example here, many 6G2 Princetons exist in outstanding original condition, having seen only light duty for a few years, then a quiet life in the closet, awaiting eventual rediscovery and a second coming as an unassuming little tone monster. And that she is. While the 6G2 packs plenty of snappy chime and twang at lower settings on the Volume dial, anything in the noon to 2 o’clock region reveals toothsome growl and snarl, and settings up into late afternoon unveils a surprisingly gutsy roar.

The 6G2 Princeton’s fixed-bias output stage takes it out of the nominal-class-A camp of the cathode-biased tweed Deluxe and the like, but its cathodyne inverter (a.k.a. split-phase inverter) puts it in sort of two-steps-forward, one-step-back situation. With this PI configuration, it will never have the clarity and fidelity to make it merely “a smaller brown 6G3 Deluxe,” a definition its specs might otherwise imply, but will instead offer a certain grit and swagger in its tonal signature, even at cleaner settings, with some voices that do at least tip their hat to the 5E3.

Like Fender’s big boys of the early ’60s, the little 6G2 Princeton was also a fixed-bias amp – a status flagged by the bias circuit rendered on its own little board in the upper-left corner of the chassis. The immaculate condition of this example and the presence of all those lovely blue “molded” Mallory signal caps make it a great, yet affordable, find.

The 6G2’s 5Y3 rectifier tube also keeps this amp tweedily brown, providing just around 315 volts DC on the plates of the 6V6s (though often a little more with today’s higher domestic AC line voltages). That, coupled with readings of around 135 volts DC on the plates of the first triode of the 7025 (a.k.a. 12AX7) in the front end, the lone gain stage in the Princeton’s preamp if you exclude the front half of the PI, makes for a chewy, tactile playing feel that can come off as being a lot more touch-sensitive than many larger brown amps and later blackface amps. A leap to the top of the ladder in the rectifier stakes would give the blackface AA964 Princeton a GZ34 rectifier and a whopping 420 volts DC on the plates of the 6V6s (a 5U4GB and 410 volts DC in the AA1164 Princeton Reverb), and while the cathodyne PI meant these models retained some signature bite, they were also a little crisper and more aggressive.

It’s a bit surprising that Fender went to fixed bias at all for the 6G2, but one of this amp’s other standout features offers a clue to the thinking behind this move. Other than the first-generation tweed Tremolux, the 5G9 and 5G9-A, Fender always preferred to mount its bias-modulated tremolo circuit on a fixed-bias output stage. This was, perhaps, for reasons of output-tube stability, although other designs have functioned smoothly with bias-wiggle tremolo acting on cathode-biased output tubes. Either way, this preference saw the Princeton upgraded to fixed-bias, and other than the single-ended Champ there was no longer a cathode-biased amp in the Fender line.

Whatever the thinking, this tremolo is an utter joy, and we can thank Leo for doing it this way. While players often rave about the lush, deep “harmonic vibrato” of the bigger early brown amps, such as the 6G4 Super (as discussed in the October ’10 issue of VG – wouldn’t they make a sweet pair?), the tremolo on the 6G2 Princeton is achieved with just half a 12AX7 and a mere handful of caps and resistors. As simple as it is, however, it modulates the output tubes in a smooth, organic manner that sounds utterly dreamy, providing one of the most evocative tremolo effects around (the harmonic vibrato of the larger brown amps is undoubtedly impressive, but sometimes you just want pure volume-modulating tremolo like our Princeton carries, not the wetter warble of the Super, Pro, or Concert). As with many bias-modulated tremolos, it’s a very playable effect, too; hit the strings hard and it steps aside so your note attack pops out proudly – allowing you to solo without switching out the effect – then makes itself known again as it throbs back into action on the decay of the note.

All in all, with its bumped-up specs and gutsier tone, the 6G2 Princeton can still find itself stuck between two stools; is it a club amp with an underpowered speaker, or a practice amp with an overpowered output stage? Make one simple change and it can be neither – and both – if you catch our drift. As sweet as the original 10″ Oxford 10J4 speaker can sound in this amp, a decent 12″ (or even a more robust 10″) makes a big difference. If you want that bigger driver right in the amp, please don’t hack a bigger hole in the original baffle; good and authentic-looking replacement baffles with 12″ cut-outs are readily available. Alternatively, use this little sweety as a “head” perched on top of the 8-ohm cab of your choice to reduce the inherent “boxiness” in the smaller combo cab. Bedroom amp? Hah! They won’t be laughing for long.