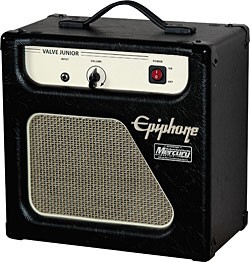 Last year, Epiphone tossed a small pebble into a large pond with the introduction of its Valve Junior amplifier – and its launch caused a tsunami.

Available as a stand-alone head or a 1×8″ combo, the Junior was as basic as an amp could be for something that still produced sound. With just two tubes, two transformers, one speaker, an input jack, and a volume knob, when a player plugged into one, there was very little to get between their guitar and their ear. And the Junior turned out to be a very good-sounding amp. It’s doubtful that any owner of a pre-’67 Fender Champ sold it after hearing the little Epi, but for under $140 for the combo and only $99 for the head, the Junior was definitely the steal of the day.

Paul Smith of Mercury Magnetics was harassed into purchasing a Junior by a journalist who insisted that if Smith didn’t agree it was the best-sounding amp he’d heard for anywhere near the asking price, said journalist would eat said amp.

Smith agreed, then he hauled the Epi into his office. Mercury’s Sergio Hamernik and Alan Cyr of The Amp Exchange, in Los Angeles, mercilessly dissected the helpless Junior for weeks before deciding on the optimum power and output transformers and choke.

“We didn’t follow any established recipes for getting tone,” Sergio said of the development of the components. “It’s not a Champ or a ‘me-too’ thing. All we were interested in was getting a tone that a musician would find inspiring.”

The kit Mercury devised has new output and power transformers, a choke added to the circuit, a CD-ROM with photographic, step-by-step instructions for do-it-yourselfers, bolts and locking nuts to attach the choke to the chassis, four or five capacitors (depending on the version), five resistors and 10″ of 18-gauge insulated solid copper wire.

The Mercury Magnetics’ transformers, well, transformed the miniscule Epiphone. Side by side with a stocker, the Mercury-modded combo has way more presence. It breaks up a little earlier, and the harmonics are much more rich and even. Also, while the stock Junior had a slightly brittle or metallic edge to the distortion (especially after 12 o’clock on the volume knob), the Mercury mini monster stayed smooth all the way up to being dimed.

In addition to helping design the mod, Cyr installs the kit at his business. After installing nearly four dozen of the kits, Alan says that at least half of the mods are for professional musicians and go right to a recording studio from his shop.

“People tell me that they actually record better than their vintage amps,” says Alan. “Once someone hears the amp, they have a job for it. It’s a pretty easy sell; the modded amp sells itself, really. You wouldn’t believe the boutique amps musicians bring in to A/B against the Epiphone with the Mercury kit. They usually end up buying the Epiphone.” Alan charges about $150 for installation in addition to the cost of the amp and the kit. The cost can go up if other modifications are requested, and he figures that it would take an average amp tech about two or three hours to do the work.

Gary Roudenko, who sells Valve Juniors modded by Alan Cyr at The Amp Shop in Sherman Oaks, California, agrees with Alan that there’s little work in making the sale. “Whoever hears it wants to buy it,” says Gary.

The Mercury-modded Epiphone Valve Junior is on virtually all the time in my home studio. If my place caught fire, it would be one of the first things I’d drag out to the sidewalk before the guys in the red trucks showed up, despite its low cost.