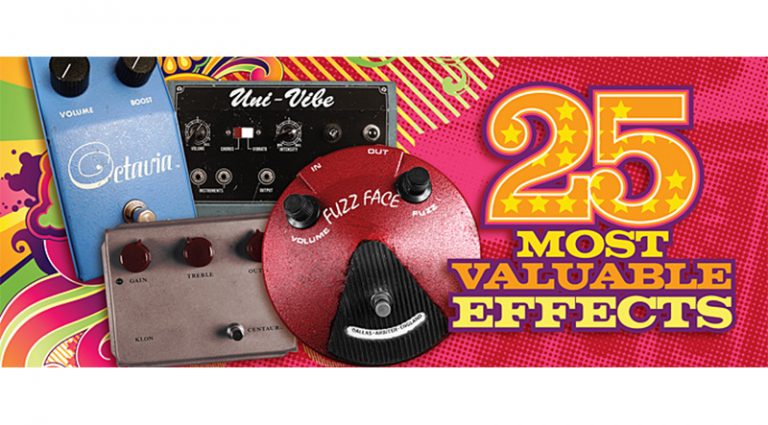 Vintage Guitar is marking 25 years of publication with a year full of features. This month, using data compiled for The Official Vintage Guitar Price Guide 2011, we continue the celebration with a list of the 25 most valuable effects. 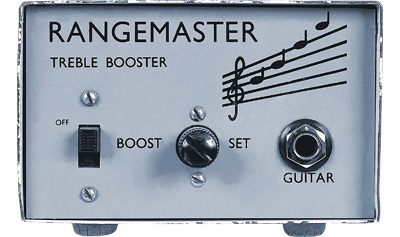 1. 1966 Dallas Rangemaster Treble Booster
($2,000 to $2,500)
Four capacitors, three resistors, one germanium transistor, plus a boost pot, two jacks, a switch, and a battery, and there you have it – the most vaunted and most valuable effects unit ever created! But as with so many collectibles, complexity isn’t necessarily an indicator of value ($825,000 for a 1918 “inverted Jenny” postage stamp anyone?), and the Rangemaster has several blue-chip factors in its camp. For one, original examples are very rare; two, Eric Clapton, Brian May, and Tony Iommi used one; three, this simple box of bits does something absolutely luscious to your tone. All that, a certain Zen-like simplicity, and quaint yesteryear design and graphics make this our magical #1. 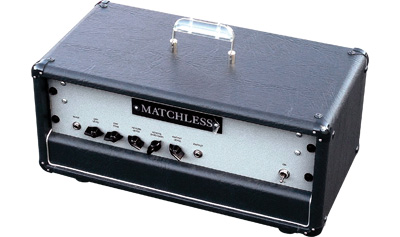 2. 1993-’99 Matchless RV-1 Tube Reverb Unit
($1,400 to $1,700)
It’s exciting to see a “youngster” (in relative terms, at least) land this high in the charts, and the RV-1 achieves its place simply by embodying an outboard tube-driven spring reverb effect that’s as lush, deep, and multi-dimensional as any guitarist could hope to experience. From surf to subtly spacey ambience, it’s the crème de la crème of sproingggg. 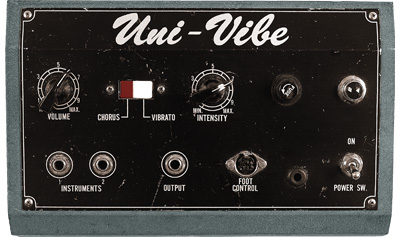 3. Late-’60s/early-’70s Univox Uni-Vibe
($1,300 to $1,500)
If Hendrix touched it, you can bet it’s enshrined as effects legend. Originally intended mainly as a rotary speaker simulator for organ players, the ’Vibe – manufactured for Univox by the Shin-Ei corporation of Japan – was really a four-stage phaser with four pairs of light bulbs and cells for a liquid, juicy tone that hooks plenty of players from the first moment they hear it, and which caught fire big-time in the late ’60s. To hear the original, check out Hendrix’s “Voodoo Chile,” “The Wind Cries Mary,” or his performance of the “Star Spangled Banner” at Woodstock – and have your waterwings at the ready! 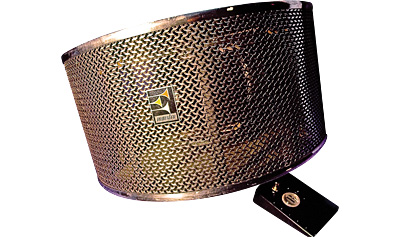 4. 1971-’73 Maestro Rover Rotating Speaker RO-1
($1,150 to $1,450)
Rather an odd duck of rotating-speaker design, the Rover RO-1 is nevertheless an extremely hip-sounding unit, and a rare acquisition besides. This circular unit measured 19″ in diameter, 9″ high (stand excluded), and produced its Doppler-inducing rotary-speaker effect by means of a 6″ speaker inside a plastic enclosure that spun within the corrugated drum. Groovy! 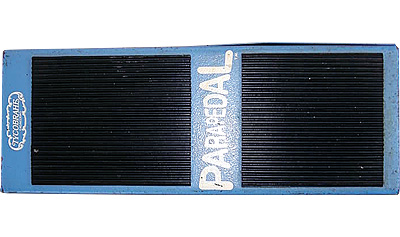 5. 1976-’77 Tycobrahe Octavia
($1,100 to $1,300)
The half-dozen or so original “Octavia” units were built one at a time by Roger Mayer for Jimi Hendrix and a few other formative artists, but since Mayer never copyrighted the name or released the pedal to the market, it was left to Tycobrahe to jump into the fray with this production model in the mid ’70s. For octave-up freakout and dissonant fuzz hijinks, this is your momma. 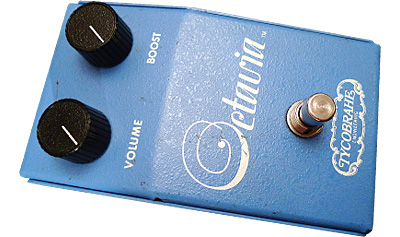 6. 1976-’77 Tycobrahe Parapedal
($1,100 to $1,300)
An original Tycobrahe design, the Parapedal was billed as a wah, but was far more complex. In addition to a somewhat traditional wah sound, the Parapedal added a second tone much like a sweeping phaser or even a tracking analog synth, with an emotively vocal dip in level and tone at the end of the pedal sweep. 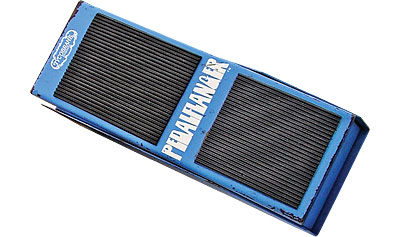 7. 1976-’77 Tycobrahe Pedalflanger
($1,100 to $1,300)
The third in a tight grouping of Tycobrahe rarities, the Pedalflanger produced a manual or automatic flanging effect that could also imitate phasing, chorus, and vibe sounds, making it a nifty four-in-one. 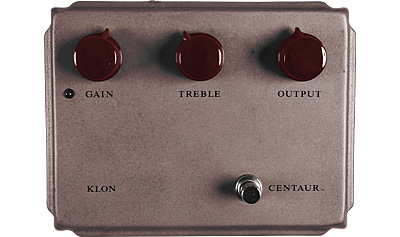 8. 1994-’99 Klon Centaur Professional Overdrive (gold case)
($1,050 to $1,300)
The Klon Centaur is something of a modern classic, and more of a tone-thickening booster than a traditional overdrive pedal. Its beating heart lies within an ultra-secret circuit covered in epoxy to foil copyists, and is blessed by secret sprites that only appear on Tone Mountain once every third full moon to bestow unbridled sonic mojo. Word. 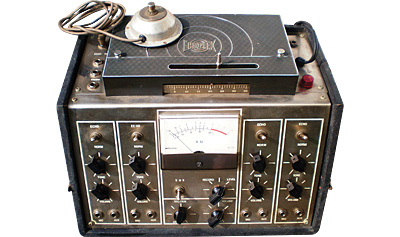 9. ’70s Maestro Echoplex Groupmaster (solidstate)
($800 to $1,300)
Intended as a studio rendition of the storied Echoplex, the rare Groupmaster included a four-channel mixer in front of its analog tape echo, with solidstate circuitry that gave your tone a juicy little sumpin’-sumpin’ besides. 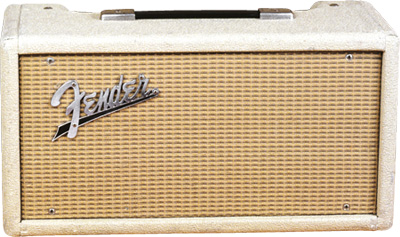 10. 1961-’66 Fender Reverb Unit (blond, brown, or black)
($750 to $1,275)
Fender might have been surprisingly slow to introduce reverb to the lineup, but when it did – in the form of this outboard tube-driven spring reverb unit – it set the standard that launched a thousand surf tunes. 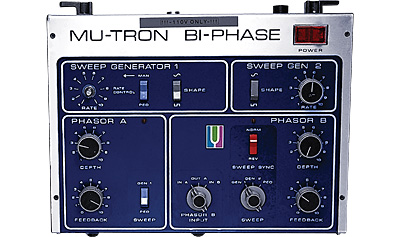 11. 1974-’77 Mu-Tron Bi-Phase (with optical pedal)
($1,000 to $1,250)
This variable-resistor-based phaser offered extensive control functions, and yielded a deep, lush tone. Whether used on automatic or controlled manually via an external optical pedal, its dual sections (A and B) could be set independently or blended to create a tone few phasers have approached since. 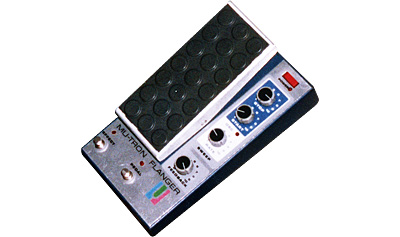 12. ’77 Mu-Tron Flanger
($1,000 to $1,250)
Another great, spacey effect from a company whose quality seemed a cut above so many pedal makers. And what happened to Mu-Tron? The company died a slow, agonizing death in its efforts to market the Gizmotron automated guitar “bowing” device, invented by Lol Creme and Kevin Godley of 10cc. I’m not in love… 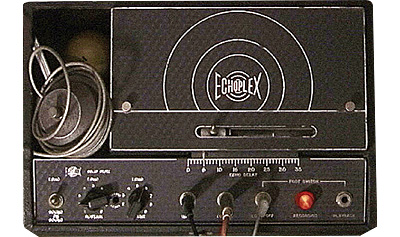 13. ’60s Maestro Echoplex (tube model)
($900 to $1,100)
The king among tape-echo units, the tube-powered Maestro Echoplex EP-1 represented a revolution in slap-back and atmospheric echoes alike, while also adding a thickening boost to any guitar signal that was jacked through it. The first versions of the Echoplex were manufactured in the late ’50s by Market Electronics, of Cleveland, and were roughly based on the tape-echo circuitry built into Ray Butts’ EchoSonic amp, which he built for Scotty Moore, Chet Atkins, Carl Perkins, and others in the ’50s. The unit’s reputation (and availability) caught fire, though, when manufacture was moved to Harris-Teller, of Chicago, with marketing and distribution under the Maestro wing of the Gibson family. 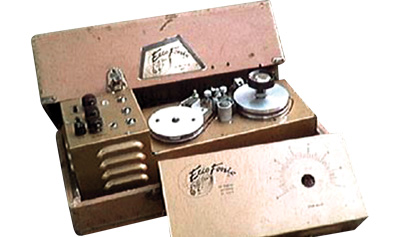 14. 1958-’59 EccoFonic echo unit
($900 to $1,100)
Cruder and therefore destined to an earlier graveyard than the Echoplex that survived it, the EccoFonic – sold by Fender in 1958-’59 – was another interesting take on the tape-echo unit, and one that tapped the signal from amp to speaker to inject three user-selectable delay times. 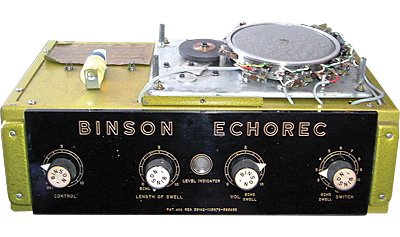 15. 1960s Binson EchoRec (tube unit)
($900 to $1,100)
Getting a feeling echo was a big deal in the early ’60s? Binson was a major player in Europe’s move toward psychedelia, and helped early Pink Floyd to achieve the spacey delays heard on “Shine On You Crazy Diamond,” among other tracks. To produce their delayed signal, these quirky gizmos used a magnetic drum recorder instead of tape. 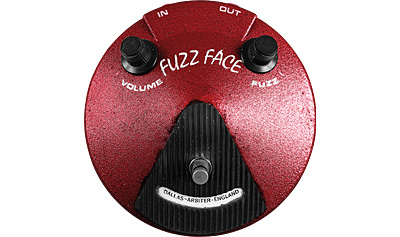 16. Late-’60s Dallas-Arbiter Fuzz Face
($800 to $1,100)
The Maestro Fuzz-Tone and Vox Tone-Bender might have preceded it, but the Fuzz Face made the biggest and longest-lasting impression on Fuzztown, and pumped countless star tones into the stratosphere besides, so it’s a deserving classic, no doubt. The Fuzz Face functions on an extremely simple circuit, with just a few more components than its stablemate Dallas Rangemaster, but with a crucial two germanium transistors coughing up the goodly hairballs. The first unit hit London’s Sound City music shop in 1966, where one young pretender to the guitar throne soon to be known as Jimi Hendrix had taken to hanging out. He wasn’t pretending for long. 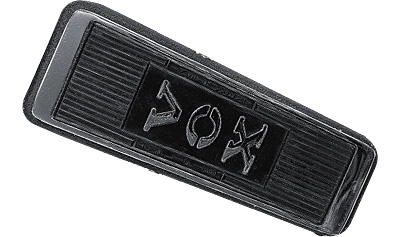 17. 1966-’67 Vox Clyde McCoy Wah-Wah Pedal
($700 to $1,100)
Originally invented by design engineer Brad Plunkett in 1965 for Vox’s U.S. distribution partner, Thomas Organ, in a bid to electronically emulate the muting effect for which trumpeter Clyde McCoy was briefly famous, this seminal wah soon underwent several evolutions in production. A short run of Clyde McCoy units was purportedly made by Thomas Organ in California, before being jobbed out to Jen Electronics in Italy, while Vox U.K.’s rendition was briefly manufactured in Dartmouth, Kent, before heading off to Jen, as well. Known for its trenchant, vocal tone, the Clyde McCoy is still considered the most expressive of wahs, and certainly the rarest. 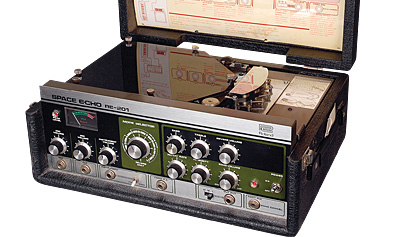 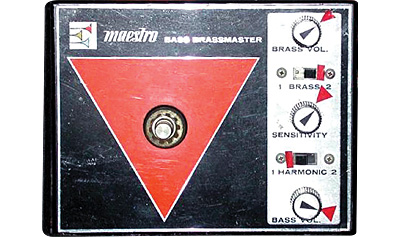 19. 1971-’74 Maestro Bass Brassmaster BB-1
($925 to $1,075)
The rare and fabled Brass Assmaster, er, Bass Brassmaster was a fuzz pedal designed for the four-stringer, but taken up by six-stringers, too. More complex than the average two-knob fuzz, the BB-1 offered controls for fuzz and instrument sensitivity, and switches for tone (Brass 1/2) and Harmonic, along with a name that harks back to the fact the fuzz was initially an effort to emulate horn sounds with the guitar. 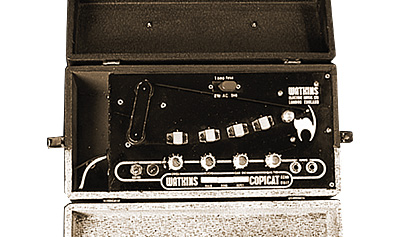 20. ’60s Watkins/WEM Copicat Echo (tube unit)
($800 to $1,000)
Providing, for a time, the chart-topping echo of guitarist Hank Marvin of The Shadows, along with that of several other British notables, the Copicat was Charlie Watkins’ clever, compact answer to the tape-echo. 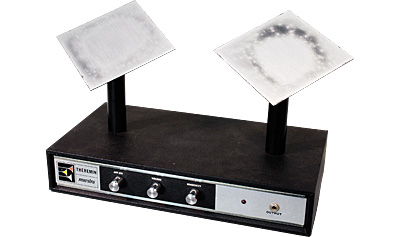 21. 1971-’75 Maestro Theremin TH-1
($825 to $975)
Less “effect” than “instrument,” one might argue, the Maestro TH-1 is nevertheless a rarity as a major-brand-name theremin. Not ideally suited to the melodic playing some theremin enthusiasts pursue, it’s nevertheless a great tool for adventurous retro electronic avant-garde-iness. And sci-fi soundtracks. 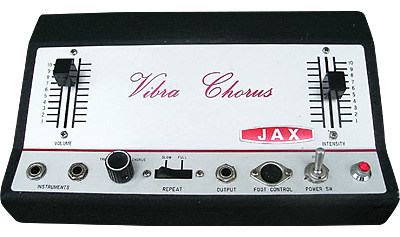 22. 1969 Jax Vibra Chorus (by Shine-Ei)
($775 to $950)
Something like a combination of Uni-Vibe and tremolo effect (and manufactured by the parent of the former), the Vibra Chorus issues a sweet, seductively watery tone that can be extremely musical and appealing. Shame they aren’t more plentiful. 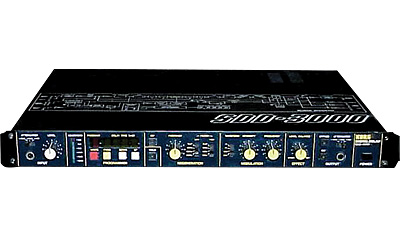 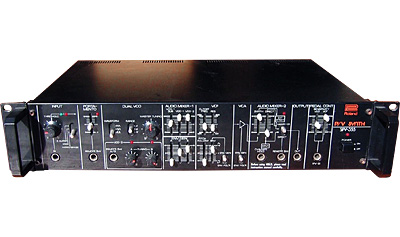 24. ’70s Roland Analog Synth SPV (rackmount)
($750 to $900)
This early, rack-mounted unit from the pioneer in guitar synths is the rare sibling to the more common GR floor units, and is still touted for its thick, pliant analog sound. Quirky, sure, but eminently playable, and deliciously analog. 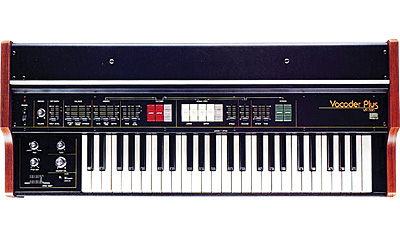 25. 1978-’82 Roland Vocoder VP-330 Plus
($750 to $900)
Although configured much like a synth, with keyboard and myriad controls, the VP-330 Vocoder Plus took any input signal you could give it – voice was common, but certainly guitar, too – and used it to shape its envelope and filters, analog-synth style. Best known from the work of Tangerine Dream, Vangelis, and Laurie Anderson.