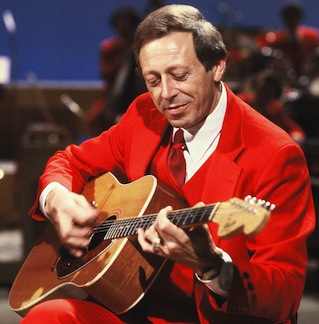 Neil LeVang, the noted studio guitarist whose list of credits includes dozens of television and film soundtracks as well as a 23-year stint with the Lawrence Welk Orchestra, died January 26. He was 83.

Born in Adams, North Dakota, in 1932, LeVang was a child when his family moved to Bemidji, Minnesota. From a very young age, he was fascinated with music he heard on WLS radio, as well as the violin and guitar played by his father and older brother. He started learning to play both instruments and was just 10 years old when he began playing in a band with a kid from the local high school.

Featured by Rich Kienzle in the December ’09 issue of Vintage Guitar magazine, LeVang recalled how, in 1945, his family moved to Riverside, California, where he would play violin at jazz jams, which led to stints in bands in various cities over the next several years.

In the mid ’50s, he returned to Hollywood and began to focus on a career as a guitarist. He replaced Barney Kessel on Jimmy Wakely’s weekly CBS radio show, and earned a spot as a regular in the studios. In ’59, he was tapped to replace Buddy Merrill, who was leaving Lawrence Welk’s band to join the Army. The gig occupied one day each week, giving LeVang ample time to continue expanding his studio efforts, which eventually included work with noted arrangers Neal Hefti, Nelson Riddle, Don Costa, and Billy May, as well as Hoyt Curtin at the Hanna-Barbera animation studios.

Other sessions included with the original Tijuana Brass with Herb Alpert, Frank Sinatra (with Hefti as arranger), Liberace, Eddie Fisher, Carol Burnett, Frank Zappa (on the Mothers of Invention debut album, Freak Out!), Bobby Darin, Bobbi Gentry, David Clayton Thomas, Elvis Presley, Neil Diamond, and Noel Boggs. He also worked extensively on television-music sessions including a “Beverly Hillbillies” cast album for Columbia, the themes for “Green Acres” and, on his Fender Bass VI, “Batman” (also with Hefti) and alongside guitarists Howard Roberts and Al Hendrickson.  He accompanied orchestral arrangers including John Williams, Patrick Williams, Marty Paich, Artie Butler, and Henry Mancini, as well as Frank DeVol, who did the themes for “The Brady Bunch” and “Family Affair.” Other television-related work included “The Ed Sullivan Show,” “The Monkees,” “Highway to Heaven,” and “Petticoat Junction.” His list of movie-soundtrack work included All the President’s Men, At Long Last Love, Valley Of The Dolls, Dick Tracy, Good Morning, Vietnam, Disney’s Herbie The Love Bug series, Rosemary’s Baby, and Smokey and the Bandit. He played mandolin on the Godfather soundtrack.

LeVang helped Leo Fender create the Bass VI, based in part on a de facto prototype created when LeVang installed bass strings on a Telecaster. He later used it on Glen Campbell’s “Wichita Lineman.”

LeVang stayed with the Welk orchestra until ’82, when Welk discontinued the program. That year, he was nominated for best artist on a specialty instrument (mandolin) at the Country Music Association awards. Throughout his career, he played instruments including the Bass VI, Fender Precision Bass, Dobro, a Gibson L-5, a Fender King, a Tarrega classical, the mandolin, as well as four-string tenor and five-string banjos.

He is survived by his wife, Nancy, son Mark, and daughters Coral, Sonja, Erika and Tanya.

Click Here to read our complete feature on Neil.