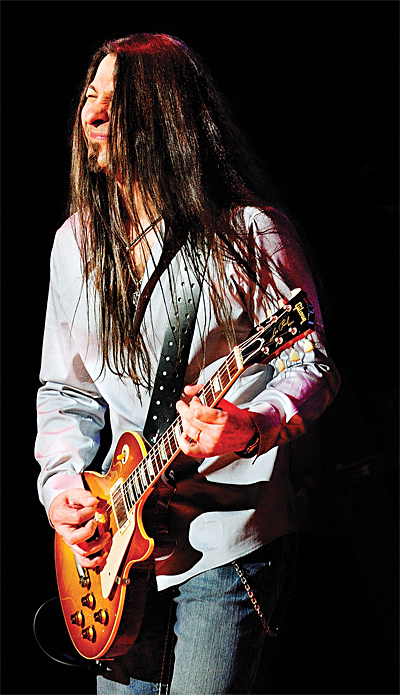 You may not recognize the name, but Michael Staertow has been playing some of classic rock’s most memorable riffs for Lou Gramm, the voice of Foreigner. Hailing from Gramm’s hometown of Rochester, New York, Staertow also performed recently with the Buffalo Philharmonic, and at the 2014 Rochester Music Hall of Fame Induction Ceremony, sharing the bill with renowned bassist Rudy Sarzo, drummer Carmine Appice, and guitarist Gene Cornish (The Rascals).

How did you get the gig with Lou Gramm?
I met Lou through his nephew, Peter, who is the son of Lou’s brother and longtime drummer, Ben. Being from the same hometown, our families were friends, and Peter and I were in cover bands in Rochester, where we played a range of music including many Foreigner songs. When Lou needed a guitarist for his band, he invited me to audition.

What gear are you using on the road?
I’m using Gibson Custom Historic Les Pauls. My go-to has been a ’58 reissue, but I also use a dark-back ’57 Goldtop reissue that used to belong to Dave Amato of REO Speedwagon and has some serious mojo. Les Pauls are key to re-creating the Foreigner sound. For amplification, I favor Marshall JCM800s, usually a 2210 and/or 2205, through 1960BV straight cabs. Two heads, two cabs, and “that one guitar, slung way down low…”

I have just a few pedals – a Dunlop Hendrix wah, Boss Super Chorus, and a Whirlwind Orange Box phaser – mostly for texture.

Who are your main influences on guitar?
I have a variety, ranging back to players of the late ’60s and early ’70s, but the standouts are Neal Schon, Ace Frehley, and Randy Rhoads. They had the biggest impact when I started getting serious about guitar – guitarists who played for the song. Don’t get me wrong, I enjoy players who rip, but nothing beats a guitar line you can hum in your head. And, let’s not forget Jimmy Page, Jeff Beck, and Eric Clapton.

What do you listen to outside of the music you perform?
I really dig the blues! All the Kings – B.B., Albert, and Freddie. Buddy Guy, Billy Gibbons, Warren Haynes. Contemporary jazz players like Jeff Golub, Robben Ford, Johnny A., and vocalists like Sam Cooke, Otis Redding, Aretha Franklin, Paul Rogers, and Steve Perry. I’m a sucker for melody, and I try to incorporate those elements into my phrasing.

What is your focus when playing Lou’s hits?
Re-creating what people expect to hear with such an iconic catalog. Also, inspiring Lou! Foreigner was a guitar-and-vocally driven band, and everyone, including myself, wants to hear the songs as they remember them. My job isn’t to reinvent them, it’s to respect them. Besides, they’re so well-written. And Lou’s solo material is equally as great. I’m pretty lucky to get to play such great music with such exceptional musicians!

Any advice for fellow guitarists?
There’s no substitute for hard work, perseverance, professionalism, and work ethic. Just stay dedicated, open-minded, and don’t be afraid to take chances. Play from your heart; you never know who’s listening and watching.