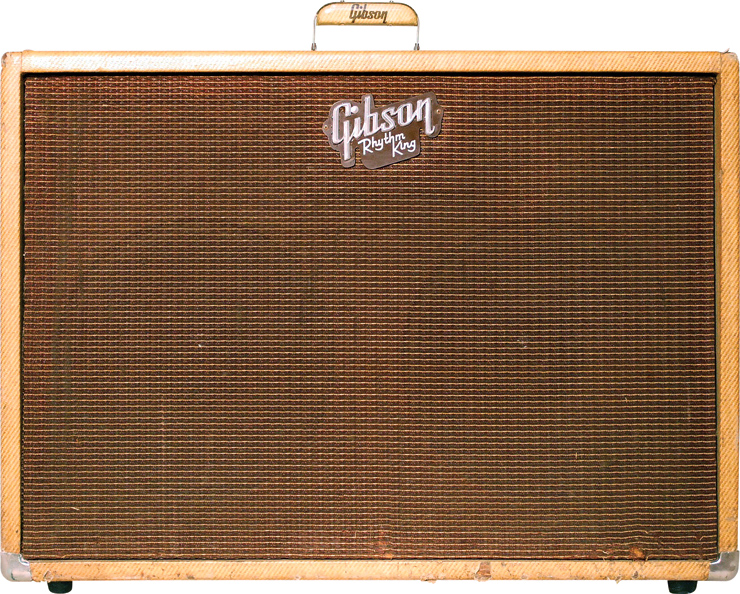 We generally love amps of the tweed era for their ability to go all chewy and juicy when hit with some attitude, but most makers of the day were trying their best to maximize headroom and clean punch within the parameters of price point and product size. When we think “vintage clean” in pre-1960 terms, our thoughts often go to the Fender Twin and Bassman, and maybe some of the larger models by Standel or Magnatone, but Gibson had it going on in this department, too. Taken at face value, the GA-200 Rhythm King might even be too clean for some tastes.

The model was introduced in 1957’s two-tone range, when only 22 were shipped, and phased out after the (somewhat altered) Crestline rendition of ’63, and our feature subject sits right in the center of that span, a pristine example of one of Gibson’s turn-of-the-decade tweed amps. Rated at 60 watts from two 6550 output tubes, with a closed-back cabinet housing two 12″ speakers and no bells and whistles other than the guts of what was necessary for loud, clean amplification, the Rhythm King was very much a professional product for the big stage. An amp that might have seemed a little behind the times already in the age of rock and roll (if ahead of the times in its inventive design), it was intended to partner the big professional archtops like Gibson’s L-5CES and Super 400, enabling them to belt out a rhythm on the bandstand.

That’s a pretty hefty output rating back in the day for two tubes fed by tube rectification, but it is all aided by some boat-anchor-sized transformer iron and substantial operating voltages on those 6550s. Given this heft in the back end and a preamp circuit tuned more to high fidelity than to tweedy grind, the Rhythm King stays clean way up on the dial, and really only gives in to a little softening crunch when you push it way hard. It was a tone that did the trick for late blues ace Sean Costello, who often pumped his vintage goldtop through a GA-200 Rhythm King, and, until recently, a model of a similar vintage to this one was also among the playing collection of J. Geils. For a lot of today’s players, “tweed tone” is more likely to conjure the sound of a 5E3 Deluxe or 5F4 Super, maybe a Bassman for something stouter, or a Gibson GA-40 Les Paul or smaller GA-20 – meaning the loud, tight performance of the GA-200 Rhythm King just won’t light the right fires. For a bold effort with good texture and depth, though, for big-stage jazz chops, cleaner blues excursions, or spanking country twang, this is an amp to put a smile on your face.

While the GA-200 lacks tremolo and reverb, it is equipped with a real rarity in guitar amps of the day: a circuit labeled “Compressor,” available on Channel 2 only. Using half each of 6BJ8 and 6SK7 tubes, and tied to the output stage via a 6V6 tube used as a voltage regulator (somewhat in place of a traditional bias circuit) this oddball extra was different from anything guitarists conceive of as a compressor today. Its job seems to have been to further ensure a smooth performance with maximum headroom, overload protection when needed, and the squelching of feedback when your big archtop started to howl. All in all, a very unusual approach to the problem and, while there might be something similar out there somewhere, we can’t think of another maker who ever used such a circuit.

Taken in its entirety, the Rhythm King also provides another fascinating example of how Gibson’s amp line resisted conforming to any particular template through the ’50s and early ’60s. The lack of a uniform format across the line, as seen with Fender amps and many others of the era, for example, might have dented Gibson’s staying power in this market, and contributed to their fading from the spotlight in the mid ’60s. But it also let the company’s designers take a pot-shot now and then, and occasionally hit something that was worth the effort. Between the angled, trapezoidal control panel with rear-facing input jacks; dual-chassis design with top-mounted preamp circuit and rear-facing power and output chassis; aforementioned compressor circuit; chunky closed-back cabinet with angled upper-rear quarter; and dual Norelco/Phillips twin-cone (a.k.a. “whizzer-con”) speakers, there was nothing else quite like it – other than, perhaps, its big brother GA-400 Super 400, which had three channels and some other differences.

As Costello, Geils, and a few other latter-day players discovered, a big, clean beast like the GA-200 Rhythm King certainly has its applications in a broad range of genres and playing styles. Conventional or traditional it is not, but it will present the bold, bare tone of whatever you put into it – and loudly – or provide a fat and sturdy platform for whatever pedals might help generate your own playing voice. As for its intended audience, it was already becoming something of a dinosaur in 1960, with the needs of the jazz-guitar market changing, and ultimately diminishing relative to those of the rock and pop boom. The Rhythm King shipped in its greatest numbers in 1960, selling 265 units. After selling 263 in ’61 – again, not bad, but not sensational – the GA-200 evolved into the Crestline styling, quite a different amp when put in a piggyback configuration with a head that tucked into the speaker cab for carting. After that, the “big clean” professional combos moved to a different, usually more-conventional form, but you can bet few if any ever sounded quite like the Rhythm King.