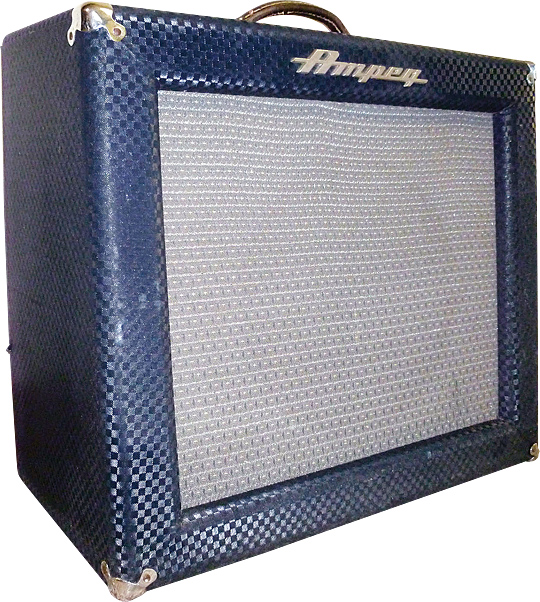 In the view of Ampeg main man Everett Hull, rock and roll was not a musical form to which his company desired to cater. As related by the late amp guru Ken Fischer, who worked as an Ampeg engineer long before founding Trainwreck Circuits, Hull felt “rock and roll doesn’t swing – it never will.” What did swing for Hull? Jazz, of course, and the piano and bass-playing Hull himself preferred, therefore, to cast his pearls before the princes of the jazz world – not the swine of rock and roll. For that very reason, and very much by design, Ampeg guitar amps of the 1950s and ’60s were bold, clean, clear, and rich, but they didn’t really grind, bite, or sting unless you really pushed them past their optimal parameters. There was one amp, however – and again, this is a Fischer-certified tip – that fell through the cracks.

Part of the key to the early-’60s R-12-R Reverberocket’s rockability is its pair of 6V6 output tubes. This long-standing Ampeg combo went through several iterations from the late 1950s into the ’70s, and many were made with output tubes that just didn’t want to break up much. We already know, though, that 6V6s give up the goods pretty readily in plenty of other amps, and the rest of the Reverberocket of this era seemed predisposed to go along with it. “That was Everett Hull’s one effort to make an amp a little more Fendery,” Ken told me some years ago, and while it might have helped an Ampeg finally appeal to a more youthful crowd, its playing against type doomed it to an early demise. “You’ve got to keep in mind that Everett Hull hated rock and roll, he hated distortion – even when blues guys would play distortion,” Ken continued. “Amps were not to be distorted. So those R-12-Rs had blue Jensens in them, 6SN7 and 6SL7 octals [preamp tubes], which are always nice, fat-sounding tubes. That amp would be a great indie-rock machine. Ampeg made it for a short while and all the jazz guys were complaining, ‘What’s wrong with the new Reverberockets? They break up too early!’ So Everett Hull converted them back to 7591 [output tubes] because people were complaining. But if they had marketed them as a rock-and-roll amp they probably would have been very successful.” 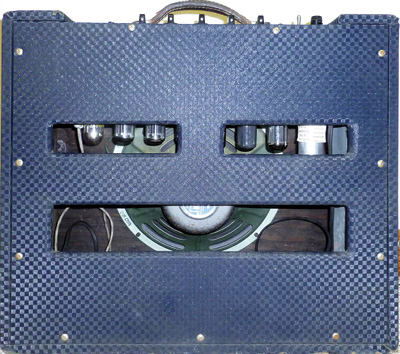 Fischer’s analysis is fascinating because, the way tastes have shifted, the very same characteristics that made Hull and his jazzer pals denigrate the 6V6-loaded Reverberocket are more likely to make players today dig it. Honestly, you want to play one now, right? Be aware, though, that while Ken called our 1962 Reverberocket an amp that was “a little more Fendery,” in context, he only meant slightly so. As a point of pride, Ampeg never did anything quite like Fender, Gibson, Valco, or any other American maker of the day, and this R-12-R does plenty of things in its own way. The 6V6s are cathode-biased, a la Fender’s tweed Deluxe, but Ampeg adds a little negative feedback to tighten it up a bit, something Fender only did with its fixed-bias amps. The Reverberocket’s tremolo and reverb circuits were also very different from anything Fender ever used… even though, ahem, Fender didn’t have reverb in an amp until the year after this came out. The bias-modulating tremolo circuit is simple and a little weak, but sounds pretty good regardless, something akin to that of Gibson’s smaller amps of the era. Back to the reverb, though, which really lives up to the common acclaim for Ampeg’s watery wonders. The older amps like this often need a little circuit work, perhaps new caps and resistors for those that have shorted or strayed far from spec, and occasionally a replacement for that impressively long spring pan, too, but gotten up and running right, with a fresh couple of 6SN7s to boot, this Ampeg reverb can sound lush and thick, without burying the tonal clarity the way some overly deep reverbs do. Note, in fact, that the Reverberocket’s control panel calls it “Echo” and labels the depth control “Dimension,” which tells you from the outset that this might be something a little special. 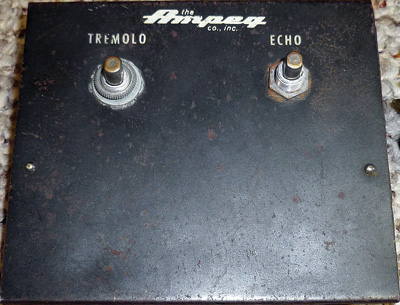 In addition, Fender, Gibson, and Valco had all stopped using octal preamp tubes like the 6SL7s and 6SN7s here in the R-12-R nearly a decade before. Combined with the 6V6s’ easy crunch and chewy compression, though, these fat bottles are a big part of the Reverberocket’s magic. Put single coils through it and the Reverberocket retains decent clarity and a crystalline bite up to a usable club volume, then juices up as you roll the Volume on past noon or so. With humbuckers, it gets into bluesy or gritty rock-and-roll territory pretty quickly, though still retains a firm edge that helps keep from flabbing out – for a while, at least. Of course, the vintage Jensen C12R speaker will start to flab out a little in its own right after a point, though should sound glorious in doing so, and just before, but a stouter, more efficient speaker might be worth considering if you want to get maximum gusto out of the circuit here (the four-bolt speaker mounting even lets you easily sub a contemporary Celestion or other speaker with four-hole frame, if that’s your flavor of choice). 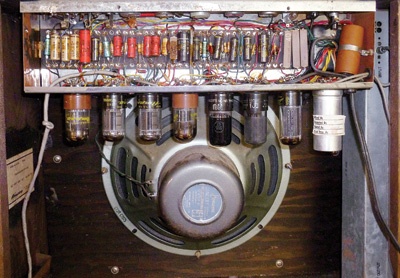 This Reverberocket also harks to an earlier age in the looks department, holding on to an aesthetic that was rapidly vanishing at the hands of other makers. The dark-navy vinyl is a little more fun than black, yet still quite serious and businesslike, and the checkerboard pattern adds a little extra flair, too. And with looks and tone admirably covered, it’s an impressively well-built combo, top to tail, too, from the logically laid-out and neatly wired circuit to the fingerjointed solid-wood cabinet and the plywood baffle.

As groovy a little rock-and-roller as this thing is, it’s difficult to pin its use down to any specific non-jazz players, and of course the long list of jazz artists who played its brethren helped drive it out of production alarmingly quickly, so it wasn’t on the shelf for very long. In good shape, though, and with fresh tubes and a lively speaker, the early-’60s Reverberocket still offers a lot of honey-drippin’ tone for not a lot of cash. 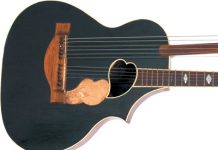 The House of Stathopoulo Harp Guitar