Hard Rock International will launch its Jimi Hendrix Signature Series Edition 29 merchandise in Seattle during a media-only event February 9. Pieces on display include a Fender Stratocaster with a visual representation of the legend’s most recognizable songs on a guitar image designed collaboratively in 1970 by Hendrix and artist Alan Aldridge. Also on exhibit will be a pair of boots worn by Hendrix circa 1967-69 during performances in New York, the Gibson Flying V Hendrix reportedly referred to as the “Flying Angel” (most guitar aficionados know it as the “Red House” guitar), a contract for the Experience regarding performances at The Fillmore and Winterland Ballroom in San Francisco in 1968, and a contract between RSVP Music and “Jimmy” Hendrix for the song “No Such Animal,” dated June 21, 1966, prior to Hendrix changing the spelling of his first name. 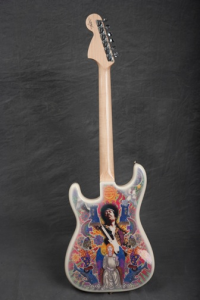