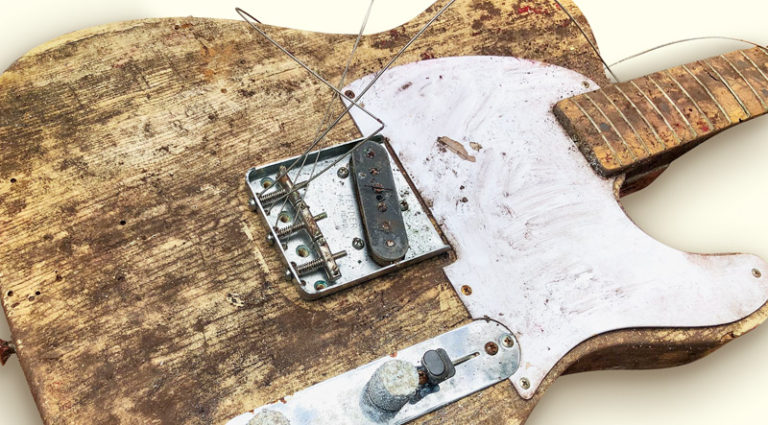 June 10, 2020, was a summer night like most in the life of Kevin Keaton, a postal mail carrier and guitarist who gigs in an acoustic duo and an AC/DC tribute band with his son, Brendon. But then his phone chimed – it was a text message from his stepfather, Ed, with a photo showing a very neglected guitar case, and one word: “Guess.”

Ed was helping Kevin’s younger sister, Stacy, and her boyfriend, Keith, clean a house and a few acres of land they’d bought from Keith’s aunt near Maxeys, Georgia. Their list of chores included clearing a storage container – a semi-trailer with the axles removed – that had been in the trees behind the house since the 1980s. While pulling stuff out, Ed noticed the case; bringing it into the sunlight, he shot the photo for Kevin.

“Of course, I called right away, wondering where the hell it came from, looking like that,” Keaton laughed. “I asked, ‘What’s inside?’ and he said, ‘It’s a Fender… pretty rotted.’

“When he tried to pick it up, the headstock fell off. I asked him to send another photo, and right away I recognized the shape; when I didn’t see a front pickup, ‘Esquire!’ popped into my head.”

Asking what they planned to do with it, Ed told him, “Keith wants to burn it with the rest of the junk.”

“I said ‘No, no, no! Wrap it in plastic and bring it to me!’ (laughs) They argued a bit, saying it was too rotted to be good for anything, but I told them that at the very least I could get parts from it.”

A month later, Ed took the once-proud guitar to Kevin at his home in Ohio. By then, he’d begun trying to put a date to the instrument using more photos of the guitar and its case, picks, a box of strings, and a strap inside. There was also a chord book.

“After seeing all that stuff and doing some digging online, I started to think it could be older, maybe from the ’50s to the late ’60s,” he said. “Brendon found a picture of the chord book that dated from the ’40s.

“As soon as we removed the bridge and pickup, we saw a date in the pickup cavity, written in pencil – 11/57.

“All I could think was ‘Wow!’ and ‘How did it get in that trailer?’ My sister asked Keith’s family, and it turned out the guitar belonged to his great uncle, who had built the house and put the guitar there in the late ’80s, then never dug it out again.”

While Keaton says the Esquire had “some of the coolest paint checking I’ve ever seen,” it was also laden with mold, rot, and small holes he thought could’ve been made by worms.

“The neck was so fragile it practically crumbled when touched,” he said. “And the case was barely held together by the moldy tweed.”

He sent photos to renowned luthier/repairman Dan Shinn, at Lay’s Guitar Repair, Akron, who identified the most-significant damage as termite infestation, but said the body might be salvageable. Wanting to avoid shipping it, he then drove the guitar to Roger Hoard (who had once given guitar lessons to Brad Paisley) at C.A. House Music, in St. Clairsville.

“Roger’s the one who used the serial number to confirm it being a ’58, even though the body is dated 11/57,” Keaton said.

He next showed pictures to Anthony Sims at Lucky Dog Guitars, in Cleveland, Tennessee, who suggested he put it in a well-executed shadowbox to hang on a wall.

“Ultimately, I decided to clean it up and put it back together for a display in our guitar room,” he said. “I’d always wanted a vintage Tele, but I sure wish this one had a happier story.”