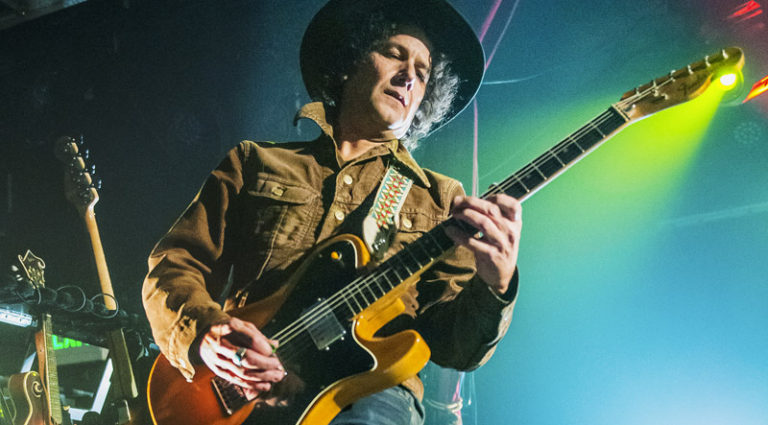 Best known as half of the guitar tandem in the ’90s alternative-rock band Blind Melon (that’s his rhythm on “No Rain,” using his Gibson J-30), Christopher Thorn has since recorded and toured with other acts including Live and Awolnation. For the past two decades, though, his work time has mostly been occupied producing other artists – his resumé includes co-producing Anna Nalick’s 2005 hit debut album Wreck of the Day and the 2021 solo debut of Afghan Whigs guitarist Greg Dulli.

Thorn broke into recording and producing using a shared-space studio in Silver Lake, California. Five years ago, he moved into a house on 35 acres in Joshua Tree, and there converted a guest cabin into Fireside Sound, a studio that has become a coveted creative hideaway for bands and producers including Joshua Bassett (High School Musical), Dan Farber (Lizzo, Mallory Merk), Matt Sorum, Afghan Whigs, Joe Coonan, and Mike Craftsman, in part because of its vintage gear. Bruce Springsteen used the site to shoot parts of the title-track video for his 2019 album Western Stars.

“I’m getting ready to build a 1,000-square-foot tracking room and a couple extra guest suites so we can accommodate more people,” he said. “And of course, anyone who books has full access to all the gear.”

Thorn recently sat with Vintage Guitar to talk about the guitars and amps he uses in the studio, reflections on Blind Melon, and more.

What was your first guitar?
The first guitar I ever played was a ’67 Yamaha FG-150; it was my mother’s, and my earliest memories of music is her playing it, doing Jim Croce and folk songs for me at a really young age.

Your instrument collection includes several very cool vintage pieces.
I bought most of them in the early ’90s, when they were affordable. When I was first buying gear, I was listening to mostly classic rock – and everyone in those bands played vintage guitars. So, that’s what I was attracted to – and why I don’t have many new guitars in the studio.

Back in the day, the Sunset Strip [in Hollywood] was amazing, with tons of great guitar shops. The day after Blind Melon got a record deal, Shannon Hoon (the band’s original singer, who died in 1995) and I went on a shopping spree and I bought a bunch of stuff I still have. I’ve gathered a few other things along the way.

Is there one that started you on the path to collecting?
The first guitar I bought when I moved to Los Angeles was a ’70s sunburst Tele Custom; I moved from Pennsylvania in the late ’80s – the metal years – but was trying to get as far away from metal as I could, so I thought, “I’m going to buy the most non-metal guitar I can think of.” For me, a Tele Custom was it. It’s been my main guitar ever since. I have three from the mid ’70s because I wrote a lot in alternate tunings, and live, I wanted to play essentially the same guitar.

What do you especially like about them?
They sound a bit like a Les Paul with that humbucker in the neck position, and then you have the single-coil at the bridge. It’s the perfect combination of a thinner sound to a really fat, warm sound.

There’s a handful of other interesting guitars, like your ’73 Gibson SG.
I got that guitar in ’91 or ’92 at one of the vintage stores on Sunset. When I play a guitar, I tend to manhandle it, but with the SG, I can’t because it goes out of tune. The Teles hold up – you can throw them down a flight of stairs, the neck won’t break and it’ll still be in tune when you pick it up. The SG feels like a fragile guitar. I did the Awolnation tour a few years ago, and that guitar worked great in that band, but in a band where there’s one guitar player – me – I might switch it up to get a thicker sound.

What’s the story behind the ’67 ES-330?
I walked into one of my favorite stores, Guitarville, in Everett, about 20 minutes north of Seattle. Val Kolbeck was so kind, and he was a fan of the band. When I walked in, he said, “I just got this guitar, and you gotta have it!” He sold it to me for $600, which was his cost. He also gifted me a beautiful accordion. He said, “I’ll give you this if you use it on a record,” and I used it on “Car Seat” from Soup. The 330 was as clean as you could imagine, and I used it to cut “2×4” and a couple other songs on Soup. It has P-90s, so it’s a really different sound than the Teles.

There are some cool acoustic instruments, like your ’54 Martin 0-17 and a Gibson A-style mandolin from the ’30s.
I’m the biggest Bob Dylan fan, and always wanted a guitar like he used early on. In 2008, Blind Melon was getting ready to do a bunch of dates and I realized just how much I hated playing a full-sized acoustic. So, I started playing parlor guitars and bought the Martin at California Vintage, in Los Angeles. I put a pickup in it and it’s now the guitar I travel with and use to write most of my songs.

I got the mandolin in the ’90s, when Creem magazine hooked us up with Robert Hunter, who wrote lyrics for the Grateful Dead. We were playing the Fillmore West, in San Francisco, but earlier in the day we did an interview, and Robert started making fun of my terrible-sounding mandolin, which I’d bought when I first got to Los Angeles. In the middle of the interview, Robert handed the Gibson to me. I was like, “Oh… am I supposed to play?” I felt a little awkward. But he said, “It’s yours!” I was floored. It’s one of my favorite moments in Blind Melon.

You have several lap steels.
I love those. I got the black-and-white Supro in Seattle, and it came with the matching Super amp. I also have a ’50s Gibson lap-steel.

Which amps do you use most in the studio?
Positively, it’s the Super. It has an 8″ speaker and has been on more records than any other amp I own. I also have two other vintage Supros – a Coronado and a Corsica that has fantastic reverb and tremolo. My new Supro Thunderbolt is also fantastic and gets used quite a bit. And I have a ’65 Fender Vibro Champ, which I bought at the same time I bought that first Tele Custom.

Other amps here are a ’71 Marshall and plenty of funky Gibsons. My ’67 Bandmaster was my live touring rig for most of the Blind Melon years, but in the studio I like little amps, which can sound huge when you need them to.

What’s your approach to getting good guitar sounds in the studio?
It sounds cliché, but the first thing is it comes from the fingers. I’ve seen it a million times, where somebody walks in and plays a guitar through a certain rig, then somebody else plays it and it sounds completely different.

Otherwise, I’m a back-to-basics guy. If I have to put three mics on a guitar amp, that’s a waste of time. I respect anyone who wants to spend time doing that, but I put a Shure SM57 on an amp and if it feels wrong or it’s not fitting in the mix, I’ll immediately swap a guitar or amp. I’m not going to try five different microphones. I believe in Jimmy Page’s phrase “distance makes depth” because pulling that microphone back a little and getting a bit of the air around it – a bit of the room – can sit it in a mix in a nice way.

What are some of your favorite guitar parts in Blind Melon songs?
I’m really proud of “The Duke.” I think that has interesting sound qualities. I had a Leslie speaker and I wrote it in open-E tuning with Shannon after a great trip we had to Hawaii. I think [producer] Andy Wallace flipped some stuff backward and I did acoustic guitar, then electric on top of it.

When we first got to Daniel Lanois’ Kingsway studio in New Orleans to make Soup, he had a Gretsch amp I used quite a bit, so when I hear Soup, I think about that amp.

I used my Jerry Jones guitar for “New Life” and “Galaxie.” It has lipstick-tube pickups, and they’re so clear and clean, so it worked perfectly for those songs.

You have two Jerry Jones guitars. How did you discover them?
Blind Melon was on tour, and one day in New York City, Shannon said, “Let’s go buy guitars.” We went to 48th Street and walked into a store where he bought this amazing red, white, and blue acoustic and I bought the aqua-colored Jerry Jones to remember the moment. When Jerry announced he was going to retire, I bought a black one because it looked like Jimmy Page’s Danelectro.

How do you and Melon’s other guitarist, Rogers Stevens, work out guitar parts?
We don’t work them out. We don’t really talk about it and it’s never been something we’ve broken down or tried to analyze. We just listen to one another; if Rogers writes a song, I try to write a guitar part that’s complimentary, and vice-versa. I’m trying to be heard and stay out of the way.

It’s a weird thing – he’s the only guitar player I interact that way with. It developed in the early Blind Melon years, I think because we jammed so much. We all moved to North Carolina, lived together, and every day was, “Let’s learn how to play together.” That taught me how to listen instead of trying to force my part into a situation. I was listening and learning how to weave around him. Now when we’re in a room together, it happens naturally, without any discussion.

What’s next for Blind Melon?
We’re finishing a record and hoping to be back on tour in 2022. We released five singles during Covid and like everybody, had to wait for everything to be safe. We have a bunch of songs almost finished, and a couple that are finished and may get released to hold people over. We’ll release a full-length album at some point.