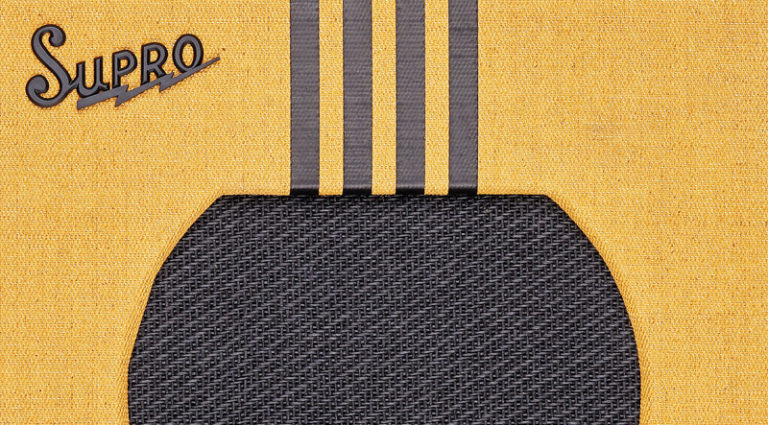 With the increasing popularity of compact, low-wattage combo amps has come an overwhelming variety of choices. Supro has entered the fray with its new Delta King series, ranging from a one-watter with an 8″ speaker perfect for practicing next to your grumpy roommate’s bedroom, to a 15-watter with a 12″ speaker that could hold its own with a fairly aggressive drummer.

The momma bear of the bunch is the Delta King 10. Its dead-simple layout pairs a single 12AX7 preamp tube with a 6V6 bottle for a Class A five-watt maximum output through a custom DK 10 speaker. Volume, Treble, Bass, Reverb, and Master controls make nailing a tone exceptionally easy, while toggles for a FET-driven boost and a Pigtronix FAT high-gain mode push things way over the top. The back panel hosts jacks for line out and an optional Boost/Drive footswitch, and a Standby switch should help prolong the life of the power tube. Modeled after the made-in-Chicago Supros from the 1950s, the poplar cabinet comes covered in tweed with black stripes or black with cream stripes. The amp weighs just 23 pounds.

The most prominent feature of the Delta King 10 is its touch-sensitivity. Whatever the guitarist wants as far as tone, it’s in their hands. The overall tone is very sweet while maintaining highs and lows. The swampy-sounding genuine analog spring reverb contributes a great deal to the pleasant personality of the Delta King. For classic and blues-rock, the Volume and Master knobs will provide all the gain most guitarists need. For more-aggressive players, the Boost switch is step one into distortion land, with Drive being step two to unlimited buzz and sustain.

A great little amp at a great price.