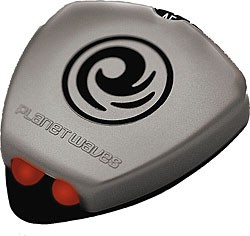 The D’Addario family has been making musical-instrument strings since before brothers-in-law Rocco and Carmine moved to the U.S. from Italy in the early 1900s.

A longtime music-industry fixture, D’Addario & Company long ago branched out from strings into other areas, like a recent crop of cleaning gear, tuners, and assorted goodies.

Tuners
The guitar-pick shaped S.O.S. (Strobe on String) mini-strobe tuner is no bigger than a Zippo, and considerably lighter. Its sole moving part is a wheel that turns to select which string you want to tune, and also turns the unit on and off.

Using the end with the plectrum, the S.O.S. focuses two oscillating lights on the string. As the string gets closer to pitch, the oscillations lessen until they stop. Viola! The string is in tune. The little S.O.S. works best by picking every couple of seconds to keep the string in motion. 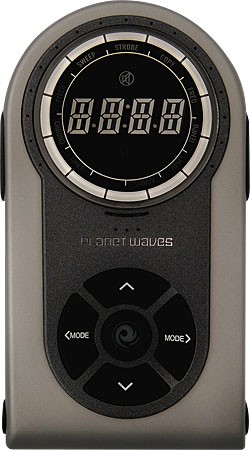 More versatile, yet still fairly compact, is the Planet Waves Multi-Function Tuner. With an internal microphone or 1/4″ jack for instrument cable or the unit’s own “tuning cradle,” the Multi-Function Tuner can be calibrated between A435 and A445 Hz. Fully chromatic, it operates in either strobe or sweep modes. The cradle acts as a sensor and is easy to attach to a headstock or soundhole, for cable-free tuning. Red and green LEDs are clearly visible on a dark stage, and the hands-off operation make this tuner a good choice for frequent tuning changes.

An ultimate practice tool, the Full-Function Tuner and Metronome has strobe and sweep tuner modes, pitch tone generator, frequency adjustability, and a metronome with the capacity to break down into beat subdivisions, with a tap tempo mode, a stopwatch, and countdown timer. A good workout can be had with the metronome functions, with each beat both visible and audible. Practice, practice, practice… 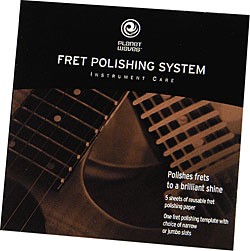 Guitar Care
With just a minute of programming, the Planet Waves Humidity and Temperature Sensor gives all the digital temperature and humidity info necessary to keep a guitar healthy in its case. Its data module stores in its memory a record that can be accessed in the event one’s guitar is damaged by climatological factors.

The Fret Polishing System is for those interested in keeping their frets nicely polished. An easy-to-use template and reusable polishing papers make the job quick and easy. The cardboard fret template, with narrow and jumbo slots, protects the fingerboard, though heavy use will nonetheless create wear. And a strip of clear plastic shipping tape attached to the template will extend its life. 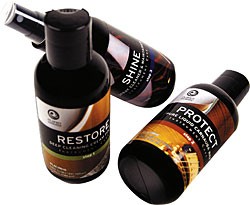 Next out of the grab bag is PW’s Hydrate fingerboard oil. Intended to help maintain dark-wood fingerboards, Hydrate is a fairly odorless blend of oils that is simple to spray on and work with.

The Planet Waves three-step polishing system did wonders cleaning up our worn mid-’70s Gibson SG, reducing visible pick wear and some previous ill-advised steel wool polishing to a nearly undetectable condition. The Micro-Fiber Polish Cloth is tailored like a Hong Kong suit, with neatly hemmed edges, and works very effectively with just a little elbow grease without using a polish to remove sweat and other gig detritus. It can be laundered and promises to be great for day-to-day use on a working guitar.

Strings
For a company that sells strings, it’s remarkable that D’Addario has developed products that extend the life of the string; it stands to reason that they would want to sell more strings. But then, D’Addario was an industry leader in environment-friendly packaging way back in ’93, so the company is committed to getting the customer the most from its products.

The company’s EXP26 phosphor-bronze Extended Play strings give the promised rounder, darker sound than the more common (and softer) 80/20 alloy. The alloy makes the string last a touch longer, but then D’Addario bonds the EXP coating to the string windings. This thin layer allows the strings to ring out normally, with no tone-altering fiber surrounding the string.

After three evenings of heavy use in sweaty New Orleans nightclubs, the EXPs showed virtually no corrosion. They stood up and stayed in tune for considerably longer than uncoated strings. Several shows later, metal fatigue – not corrosion – killed off these strings, as one finally broke. The tone, especially of the thrashed-on low E and A strings, was finally losing its definition.

The PW String Cleaner, when used per the instructions (including keeping it away from a guitar’s finish!), promises to add still more life to a string set by removing sweat and finger gunk that affect the sweet tone you’ve worked so hard to produce. After one quick cleaning, we found plenty of evidence of gunk on the cloth, proof that the cleaner did its job (and hinting that perhaps we should wash our hands more frequently!).

Time once was when furniture polish and one brand of strings were the extent of the guitar accessories at the local department store. But Planet Waves and D’Addario have taken us into a new realm of guitar care, with products useful to pro and hobbyist alike.