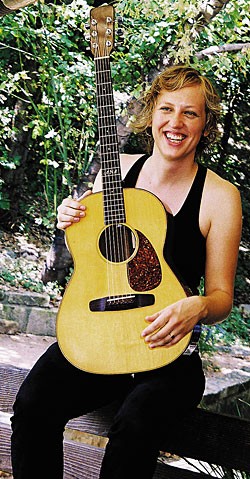 The myspace page of singer/ songwriter/ guitarist Ana Egge has the usual stuff most musicians put on their pages. Under “Influences,” there’s a long, eclectic list that ranges from Randy Newman to Redd Volkaert to David Byrne. But the most revealing, and accurate, bit of information is under the heading “Sounds Like.” The answer? “Ana Egge.”

Over the course of five albums, 31-year-old Egge has received high praise from the likes of Lucinda Williams, Buddy Miller, Shawn Colvin, and Ron Sexsmith for her compelling voice, deft guitar playing, and intelligently crafted originals. Her latest CD, however, is entirely covers, she explains, because she was too lazy to write an album’s worth of new songs. But the appropriately titled Lazy Days (Grace/Parkinsong) reveals that Egge is an adept interpreter with a wry sense of humor – culling tunes from the Zombies, Sandy Denny, and Gene Autry to create a concept album about laziness.

Whether writing or arranging, she adds layers overlooked by too many folk/Americana types. “I think it’s because I fell in love with playing the guitar,” she muses. “I’ve always been blown away by solo players who could fill up a lot of space without making it seem crowded – playing the whole song with the guitar. It’s been a natural thing for me to write the guitar part with the melody, and have the hook be a guitar part, and find parts for other instruments to play off that for the recording.”

Born in tiny Ambrose, North Dakota, her family moved to Silver City, New Mexico, when she was 10. Raised on Merle Haggard, the Grateful Dead, Dire Straits, and the Beatles, she was especially drawn to Elvis Presley. She met Sarah Brown through the blues bassist’s sister, Kate, who also lived in Silver City. “She turned me on to J.B. Lenoir, and he’s my favorite. That acoustic stuff he did, I never tire of it. It’s totally unique, and it never fades. He’s so undervalued – which I don’t understand. His voice was amazing, his guitar playing; he was so original.”

Austin bluesman Steve James came to play the art center of the Down To Earth high school, founded by her hippie parents. “He was the closest thing I’d ever seen to a rock star,” she laughs. “From that moment on, I kind of followed him around and made him show me stuff. He gave me three extended-play cassettes – one each of Chuck Berry, Hank Williams, and Muddy Waters. He pointed me in the right direction over and over again.” She lists Mississippi John Hurt, Bukka White, and Big Bill Broonzy as other blues favorites.

At 15, she wrote her first song, “Mind Over Matter,” which later appeared on her debut, River Under The Road and the live Mile Marker. “It doesn’t have to be complicated,” she says of songwriting, “but it has to be original for it to last, and it has to really mean something to you. And if it does, it will mean something to other people.”

That same year, she took an astrology class taught by “this hermit,” Don Musser – in part because she knew he was a luthier. “I was playing guitar every day on a friend’s Gibson LG-2, or B-25. I was obsessed with guitar at that point. So I’d ask Don questions, like, ‘What does X-bracing mean?’ That summer he called me and asked if I wanted to work in his shop and build a guitar. I finished the guitar in a little over a year. It was an amazing experience.” 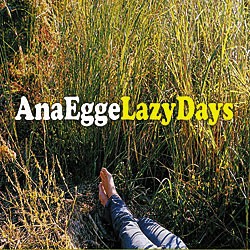 She details, “I loved the way that borrowed Gibson felt, so I just copied everything about it – small body, X-braced, with a larger soundhole. It’s got a 14-fret neck and is made of spruce and mahogany. It’s got an unadjustable trussrod in the neck, because I liked the idea of it not moving much ever. Besides a little bit of swelling over the years in the belly, like behind the bridge, the guitar hasn’t moved at all.”

At first, the finished product was “tight.” “It was like a new pair of shoes. You could tell that everything was working perfectly, but there was no room to breathe in it. The sound was going in and bouncing directly out. It wasn’t absorbing anything and bringing it back with some of its own character – because it didn’t have any character yet. Don stressed to use as few trees as possible – the wood from one or two trees. Because you want all these pieces, with the glue and lacquer, to have the same vibration. It takes time and a lot of playing and weathering to slowly make it fall into itself as one thing. It took about a year and a half before it developed a richer, warmer tone and its own character.”

It’s remained her main guitar for 14 years – her other axe being a ’97 National resophonic Estralita that was a surprise gift from James and various music luminaries of Austin (which she moved to in ’95) – Brown, Ray Benson, Rich Brotherton, Cindy Cashdollar, Dave Sanger, Lee Barber, and James McMurtry.

Now based in Austin and Brooklyn, with a house she built herself outside Silver City, Egge spends much of her time on tour. “On some level I’ve always known that this was what I was going to do. Because I love it, and it makes me feel alive. I definitely felt a complete push towards this. Besides the compulsion or obsessive need to do it, I don’t know what else I would do. Not that I’m incapable of working a day job – I’ve worked a ton of those, along with fulfilling this main job that I do – but it’s really a drive. And it’s not just me driving it. It has nothing to do with a need for fame or glamour. If I spent as much time promoting myself as I do writing and playing, I would have more people at my shows, but I might not have as many songs that I believe in.”


This article originally appeared in VG‘s March 2008 issue. All copyrights are by the author and Vintage Guitar magazine. Unauthorized replication or use is strictly prohibited.
ANA EGGE- A Summer Wasting