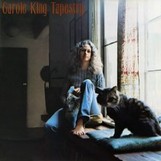 Tapestry is one of those albums that pushes everyone’s nostalgia button. Released in 1971, it became such a monster hit (six million copies sold, four Grammys, and six years on the Billboard Pop charts) that its songs are deeply planted within the musical psyche of a generation.

This Legacy Edition contains two CDs, one of which captures live solo-piano recordings from the ’70s, while the other is a remastered version of the original studio album, which we’ll focus on here. While Carole King’s songs, lyrics, and singing deservedly got the spotlight on that seminal disc, there was also a tight band that backed her on most every track. The guitar core of this lineup featured Danny Kortchmar on electric (listed under his nickname “Danny Kootch”) and his then-boss James Taylor on acoustic. Manning the bass was King’s husband at the time, a fabulous four-stringer named Charles Larkey, previously of a cult ’60s band called the Myddle Class.

While the instrumental side of Tapestry is dominated by King’s deft piano work, there’s actually plenty of fine guitar and bass work going on, too. Kortchmar’s

Toto: 40 Trips Around the Sun