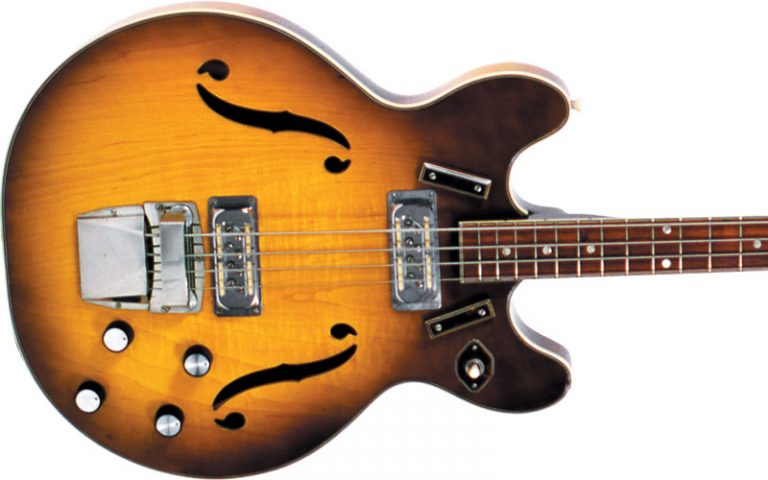 “The H27 was fanciest semi-hollow bass ever offered by Harmony.”

During the guitar boom of the 1960s, the Chicago-based Harmony company struggled to keep up with the demand for instruments while simultaneously combating its image as a “cheapo” manufacturer. At the time, its fanciest production models were a series of thinline hollowbody electrics modeled after Gibson’s ES-335.

These Harmony instruments – four guitars and one bass – had double-cutaway bodies, and the guitars had three DeArmond pickups with separate volume and tone controls and individual off/on toggle switches. These made them more versatile than other three-pickup guitars of the time like the Fender Stratocaster or Gibson ES-5 Switchmaster. Their bodies had arched tops and backs made from laminated maple and measured 153/4″ wide and 2″ deep. The top sported two segmented f-holes. The bolt-on neck was maple, with an “ovalled rosewood fingerboard,” according to a 1966 Harmony catalog.

The series was replete with cosmetic amenities, including multiple binding (six-layer on the top edge of the body, for example) and tortoiseshell celluloid overlays on some models. The differences were relatively simple: the H75 had a distinctive harp-shaped tailpiece described in the 1966 Harmony catalog as having “…rich brown mahogany shading with sunburst effect.” The H76 was an H75 with a Bigsby vibrato tailpiece. The H77 also had a harp-shaped tail, and its finish had a “…warm cherry red tone, lightly shaded.” Not surprisingly, the H78 was an H77 with a Bigsby.

Curiously, Harmony waited nearly a decade after the introduction of Fender’s Precision Bass to enter the electric bass market. The single-cutaway, hollowbody H22 debuted circa 1961 with a huge, angular pickguard, before morphing into the double-cutaway H22-1 toward the end of the decade (see “The Bass Space,” April ’06).

However, the H27 – the solitary bass in Harmony’s fanciest series – went a different direction. While the H22 was a single-pickup bass with a tone-bypass switch, the H27 had two of the company’s Golden Tone pickups (“…designed in cooperation with DeArmond,” according to the ’66 catalog) with four pairs of offset polepieces.

The H27 was sold only in the light sunburst finish, and while its headstock is laminated in tortoiseshell, it has a slightly-oversized Fenderish four-on-a-side tuner profile. And while it didn’t have a tortoiseshell pickguard like the guitars, its pickup toggle switch, as well as its thumbrest and fingerrest were tortoise-topped. And while the H series guitars had block fretboard inlays, the H27 had dots.

One bit of hype from the ’66 catalog describes the H27 as having an “Ultra-Slim maple neck” that was “…full scale, 30 inches from nut to adjustable bridge, Torque-Lok reinforced.” In bass parlance, 30″ actually means short-scale (full-scale is 34″).

Like its pickups, the H27’s bridge and tailpiece were unique. Touted as “precision 6-way adjustable,” it had a snap-on cover and was similar to Gretsch’s Space Control bridge; i.e., the six-way adjustment was for spacing between the strings and height on either side. But it could not be used to intonate the instrument. The tailpiece, hidden under a cover that screwed onto the body, was a metal block with string grooves.

The H27 had separate volume and tone controls for each pickup, with cylindrical, silver-topped control knobs borrowed from the H72 and H79 12-string.

Occasionally, notable flame-maple figuring could be found on the bodies of the H27 and corresponding guitars, enhancing their status as the fanciest Harmony instruments crafted at the time.

The design of the H27 meant it suffered from the same fate as other hollowbody basses such as the Fender Coronado series, primarily that it was neck-heavy (and looked like it!).

Harmony later marketed a less-fancy version of the H27, and in the early ’70s the company was in terminal decline by the time it offered the H420 bass in an uninspiring burgundy color and cheaper parts such as a wood fingerrest and thumbrest, white pickup-toggle plate, and white control knobs (though its headstock did keep the tortoiseshell laminate).

The H27 was the fanciest semi-hollow bass ever offered by Harmony. It has a decent sound and slim neck, which can make for easy plunking on its short scale.