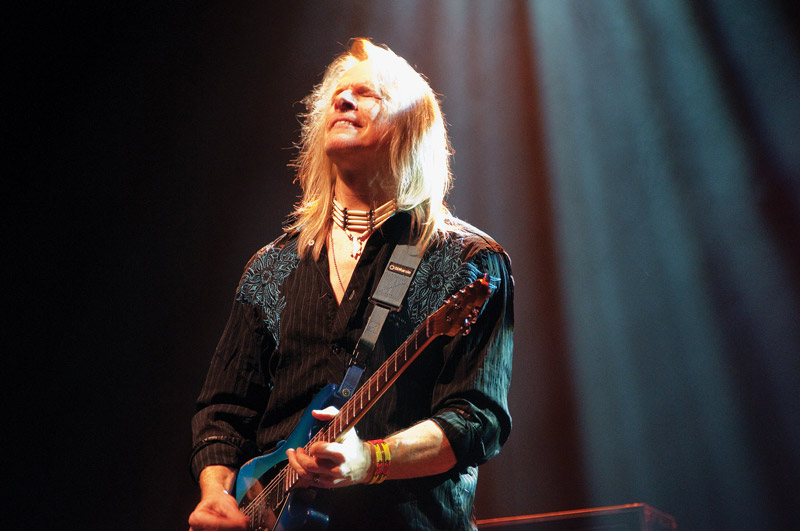 Steve Morse has been revisiting the past. A member of Deep Purple since 1994, this year he reunited with the original lineup of Dixie Dregs, a band that was key to the ’70s jazz-rock revolution and added deep-fried bluegrass and Southern funk licks to the genre, bolstered by Morse’s rapid-fire picking and the contrapuntal bass work of Andy West. VG checked in with Morse as he was preparing for the long-anticipated tour.

What provoked a Dregs reunion after all these years?

When keyboardist T Lavitz died in 2010, it shook us all up – and then Mark Parrish (keys on What If and Night of the Living Dregs) also died around the same time. We didn’t even know where our first keyboardist, Steve Davidowski, was, but we finally got in touch with both him and violinist Allen Sloan, and got together for a trial playing session. It went surprisingly well, so we decided to do a reunion tour.

Fans are thrilled that Andy West is back in this lineup. On Dregs records, he provided that Baroque-styled bass so central to the music.

Since high school, Andy and I always shared similar styles of humor – starting with the name, which we got because we were the dregs of our band that had just broken up, Dixie Grit. So, if Andy said something that made us laugh, it became a song title, or even the name of the band. Since he always played with a pick, and was open to things like putting the bass through a guitar amp, as well as a folded-horn cabinet, we considered his parts as half of our sound. After all, we really started playing gigs as a trio, with Andy and I playing all the notes.

What other memories derive from those early days?

We were sort of a prog rock band before the term got used. When we played at a dance or some other function, people were divided in the audience between really liking us and really hating us because we didn’t play the Top 40 hits. Back then, there were opportunities to play, even if they were for free concerts. All young people went out of their way to listen to live music, and I still wish that was more common.

What’s in your rig for this tour?

I’m using my original Music Man signature guitar, which is configured like the FrankenTele I used on the first six Dregs albums, but with one extra fret. I’ve even ordered another bridge with nylon pieces, which is what I used with the Dregs. And I’m using my Steve Morse Model Engl amp, but with much less volume and fewer speakers than my Deep Purple rig. Same TC Electronic pedals for delay, since they are fantastic quality and small size.

Forty years ago, you were a pioneer in bringing things like guitar synthesizer, octaver, and envelope filters to rock guitar – things we take for granted now.

I should say that Andy did all of those things on his bass, too! I ended up using the guitar synthesizer for gigs, but the easiest sound on the ears was an octave below. Later, synths became digitally tuned and I used more-typical synth sounds, but back in the day, it was a pain to keep my MiniMoog in tune.

Fairly exciting. I loved messing with tape echo, and finally got an Echoplex, which had noisy tape hiss at higher gain settings. Then I had the idea of putting the echo on a “wet only” setting through a second amp with the treble turned down. This gave the basic effect of the echo with reduced tape hiss, and the sound didn’t distort the dry notes. It was an easy step to use my volume pedal to regulate the amount of echo, and that became the basis of my rig from then on.

In the early ’80s, the Dregs had to face changing tastes in music, and eventually broke up. Forty years on, how do you recall the original band?

I never had delusions of grandeur. I knew as a teen that the music I liked would go in and out of fashion, but that I could survive doing music that I enjoyed. And that’s how it developed. It was great to have a band of like-minded people that were able to get satisfaction from playing. We were young and had little income, but we all got a sense of satisfaction from a band that gave us pride. That’s a great way to launch a career. Looking back, I’m grateful to all the guys for everything they did. – Pete Prown