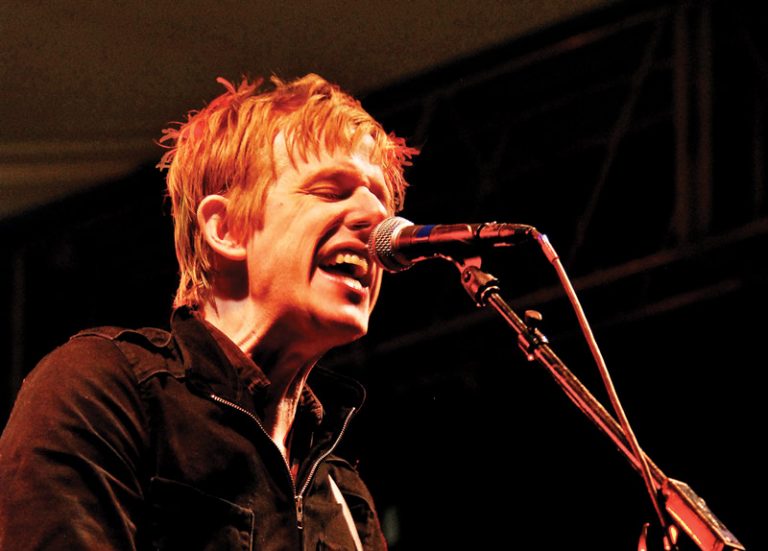 If the Beatles were still around, chances are they’d be checking out Spoon. Like the Fab Four, the group revels in sonic exploration, creativity, and stunning pop tunes. Since forming in’93, the Austin-based unit has recorded nine studio albums, including their most recent, Hot Thoughts, and a 10th-anniversary remastering of their best-known, Ga Ga Ga Ga Ga.

Daniel’s style is unique. He plays like the Thelonious Monk of guitar heroes with chordal stabs, syncopation, off-kilter intervals, and plenty of effects. All of which combine to craft the novel sound that is Spoon. VG spoke with him in the midst of a year-long world tour.

Do you follow the Lennon-McCartney style of songwriting – lyrics first, then music? Or is it more Jagger-Richards – create riffs and melodies with “placement” syllables?

I’ve done both, but mostly I come up with chords and melody first, with made-up words, syllables – a couple might stay in to lead the direction. And the less I think about it, the better. To me, the melody is what a song’s all about – chords and melody effect you emotional. Doesn’t happen all the time. “The Underdog” (from Ga Ga Ga Ga Ga) was an exception; I wrote the words first.

I come up with chords as I go, and sometimes switch from guitar to piano; I futz around, playing rhythm chords on piano and sometimes end up going where I wouldn’t if I was writing on guitar, just because I know less about it.

Many Spoon songs have complex arrangements. Do you come up with them, or is it a full-band process?

I do a lot of demoing on my own, and if there’s something good, I know there’s a song there somewhere. If something’s not demoing so hot, I’ll take it to the band and say, “How can we do this?”

Do you have rules about things you won’t try? I’ve never heard a blues shuffle or big AC/DC power chords in a Spoon song.

Oh, I would love to write an AC/DC-type song! I’ve been trying, but it doesn’t come across. “Do You” (from 2014’s They Want My Soul) was my best stab; a simple, repetitive riff. But it’s me, so it comes off differently.

What are your favorite guitars?

It used to be ES-335s. Before I could afford a 335, it was a Guild Starfire that just would not stay in tune, so it needed to be put out to pasture. I still play a Starfire with DeArmond pickups that are worth more than the guitar. They do sound amazing.

Onstage, Fender Thinline Telecasters are all I play. They have the scrape-y Fender sound I like, and I’m mostly a rhythm player, so that works. It’s lighter than a 335, so I can toss it around, and that f hole is such a cool detail. I’ve bought a lot of guitars based on looks.

My main amp is a small head built by Matt Gilchrist that I plug into the speakers of an AC30. The idea is that if I fly somewhere, I can plug it into any AC30 speakers. On tour, we have a few AC30s with us and I just plug into those. But the Gilchrist head is like an AC30, but made exactly the way I want it. Whenever I rent an AC30, they’re always way too hot-sounding, without detail and finesse; I just want to get a full sound that’s not distorted and crunchy. I was finding that rentals went straight from “off” to way distorted. The Gilchrist is a little mellower and provides more detail and options. I’ve also got a really nice old tweed Princeton from the ’50s.

And you love effects…

There’s effects all over everything on this last record, [especially] a Klon Centaur. We use a Boss CE-1, and I’ve never heard any vibrato that sounds anywhere near as good; it just sort of twists everything up. I don’t use the chorus, just the vibrato. We use a lot of tremolos. I’m pretty happy with the Boss TR-2, which is basic but does the job.

The Lightfoot Labs Goatkeeper is an amazing tremolo that can give all these different wave forms, but the cool thing is it will generate a tremolo according to the speed of the signal. That’s really handy if you want to do something that’s right on, although sometimes you want to drift a little.

We also use a lot of JHS Pedals, especially the Colour Box, which emulates the sound of plugging directly into a Neve preamp board and cranking it! – Michael Dregni