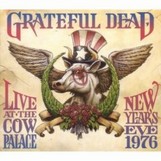 The Grateful Dead was an electric jug band with more in common musically with Jim Kweskin than Jimi Hendrix. On this new three-CD set, you can hear this ultimate jam band at its loosest-tightest best.
On this recording, the husband/wife duo Keith and Donna Godchaux held down the keyboards and background vocals. The rest of the band is the same as ever; Jerry Garcia (guitar and vocals), Bob Weir (guitar and vocals), Phil Lesh (bass), and Mickey Hart and Bill Kreutzmann (drums and percussion).

Any serious Deadhead has at least 100 hours of bootleg recordings from various Dead concerts. One problem with many of these is they sound really bad. Live at the Cow Palace – New Year’s Eve 1976 was originally broadcast over San Francisco’s KSAN and sounds fantastic – even better than Live Dead. The balance between guitars, bass, drums, and vocals is nearly perfect.

According to the liner notes, the Grateful Dead began this concert “somewhere after ten” and ended “close to three hours into the new year.” In other words, this was a typically long Dead concert. The setlist included standards like “Bertha,” “Sugar Magnolia,” “Good Lovin'” “Not Fade Away,” “Uncle John’s Band,” “Deal,” “Playing in the Band,” and “One More Saturday Night” as well as more obscure numbers “Samson and Delilah,” “Slipknot,” and “Help On The Way.”

Like any Dead concert, moments of inspired brilliance are interspersed among many minutes of directionless noodling. But true fans know that the time spent waiting for the music to take off, phoenix-like, is all part of the journey.


This article originally appeared in VG‘s May ’07 issue. All copyrights are by the author and Vintage Guitar magazine. Unauthorized replication or use is strictly prohibited.