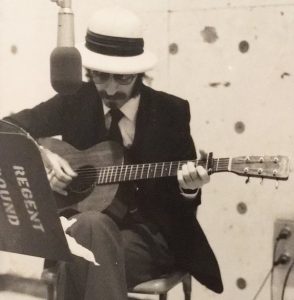 Singer/songwriter and guitarist Leon Redbone died May 30. He was 69, and while a cause of death has not yet been disclosed, he retired from performing and recording in 2015, citing health issues that had “been a matter of concern for some time.”

Redbone created a performing persona rooted in his reverence for gramophone-era jazz, country, ragtime, blues, and vaudeville. Typically dressed in a white suit with a string tie, dark glasses, and a panama hat, his music recalled Jimmie Rodgers, Jelly Roll Morton, Emmett Miller, Bing Crosby, Blind Blake and other notable artists whose heyday was the first half of the 20th century. He emerged from the Toronto folk scene in 1972, after Bob Dylan caught his set at Mariposa Folk Festival in Ontario and dropped his name during an interview with Rolling Stone.

Redbone released 16 albums beginning with his 1975 debut, On The Track, through his most recent, 2014’s Flying By. He also recorded for TV and film including the theme to the ’80s ABC series “Mr. Belvedere.” In the early ’90s, his version of Fats Waller’s “Your Feets Too Big” was the theme to “Harry and the Hendersons.” For the 2003 film Elf, he was the voice of Leon The Snowman and performed “Baby, It’s Cold Outside” as a duet with Zooey Deschanel. He was also the first performing artist to appear twice in the same season of “Saturday Night Live” (season one), and returned in seasons three and eight.

He is survived by his wife, Beryl Handler, daughters Blake and Ashley, and three grandchildren.