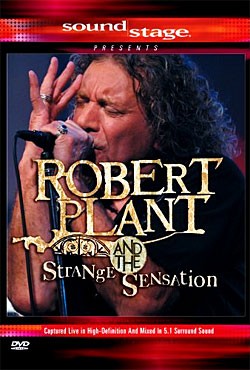 Robert Plant and his band, The Strange Sensation, play 11 songs; covers, old Zep songs, and newer Plant tunes. The band is the perfect complement, anchored by guitarists Liam “Skin” Tyson and the versatile Justin Adams, who handle everything from a smoking “Whole Lotta Love” to the funky, and political “Freedom Fries.” In between, there’s fabulous takes on old stuff. “Black Dog” has never sounded this funky or this good. The riff is there, but it gets a bit of a makeover. “Gallows Pole” stays close to the original until Tyson’s guitar comes in. It’s a nice update. The atmospheric “The Enchanter” is pushed along by fine slide playing, “Four Sides” pays tribute to John Bonham.

The disc comes with two bonus tracks; one a fascinating take on a song that is so associated with a certain sound it almost seems sacrilege to change – “Hey Joe.” But it works incredibly well. There’s also a folky take on Dylan’s “Girl From the North Country.”

The band is splendid, and it’s no surprise that Plant is, too. He sings well and knows how to work the crowd. While age may show in his face, it hasn’t diminished his ability to sing, his taste, or his songwriting. Any fan would have to have this for both the good old days and the new days.


This article originally appeared in VG‘s Feb. ’07 issue. All copyrights are by the author and Vintage Guitar magazine. Unauthorized replication or use is strictly prohibited.