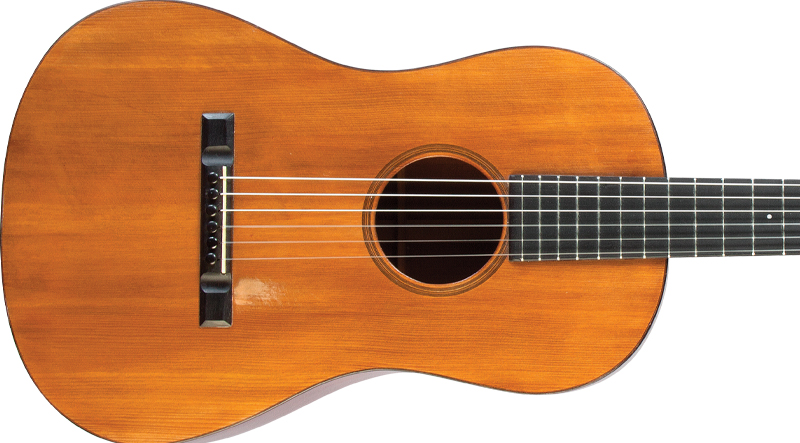 In the early 20th century, any shopper who walked into the Charles H. Ditson & Company music stores in New York, Philadelphia, or Boston could have bought a guitar, bowl-back mandolin, or ukulele made by Martin.

Ditson initially approached the venerable builder simply to fill a niche in its product line, then a bit later to satisfy demand amid a Hawaiian-music craze of the early/mid teens. The arrangement ultimately had an enormous impact on the history of the guitar.

Wanting to deepen its Hawaiian-related offerings beyond ukuleles, in 1915, Ditson asked Martin to make guitars in two sizes, “Standard” and “Concert,” each in three levels of dress and with fan-style bracing that was heavier than Martin’s standard models, perhaps bowing to budgetary considerations but also suggesting they were intended for steel strings and Hawaiian-style playing.

The Ditson featured here is a 1916 Style 11. It has a Concert-sized body and bears serial number 84. Martin records indicate only 71 of these were made and this one went to Charles H. Ditson & Company, New York, on November 11, 1916, as part of a shipment that included one Ditson Style 1 uke, 25 Ditson Style 3 ukes, seven Ditson Style 1 guitars, six Ditson Style 11 guitars, and one Style 4 Martin mandolin.

The Style 11 is similar in size to a Martin 0, but with the sloped shoulders and moderately curved waist of Ditson products. It conforms to specifications of the period with its brown-stained spruce top, fan bracing, mahogany back and sides, Brazilian rosewood center back strip, multi-ply soundhole rosette, ebony bridge with “truncated pyramid” ends, V-shaped mahogany neck with Brazilian rosewood heel cap, slotted peghead with die-stamped “Oliver Ditson Co. Boston New York” on the rear, side-mounted strip tuners with white buttons, 19-fret ebony fingerboard (with 12 frets clear of the body) and mother-of-pearl graduated dot inlays, bar-type frets, ivory nut and bridge saddle, and multi-ply Brazilian rosewood binding on top edge of the body.

Not long after Ditson’s original order, Harry L. Hunt, manager of Ditson’s New York store, requested a larger guitar based on one recently built by Martin for performer Major Kealakai, shaped like a regular 12-fret 000 but measuring 1/2″ longer and 1/2″ wider. The resultant Style 111 (222 in fancier trim) was given the same shape as the other Ditsons made by Martin and shipped with a standard gut-string nut and saddles along with a nut extender to elevate the strings for slide playing.

While certainly novel, none of the large-body Ditsons sold well; records reveal that of the 571 made between 1916 and ’21, only 14 dreadnought-sized guitars were built before Ditson officially put an end to the experiment.

The dreadnought might have ended there, but Hunt refused to let the idea die. In 1923, he asked Martin to build a few more, and by 1930 they’d made 18 Ditson Style 111 guitars. The final Martin-built Ditson guitars were ordered November 28, 1930, and carry serial numbers 44997 and 44998; Ditsons produced between 1916 and ’21 use a separate serial number system – 1 through 571 – but those built after 1921 have standard Martin numbers and X bracing, which is preferred by most players.

Liquidation of the Oliver Ditson Company in 1931 could have been the end for Martin-built dreadnoughts. After all, Martin’s long-standing belief was anything larger than a 000 would produce too much bass. However, after an apparent change of heart in the spring of ’31, Martin logs show completion of a D-21, followed a month later by references to D-1 and D-2 (soon after re-named D-18 and D-28).

The dreadnought was a “slow-burn” success for Martin; from 1931 until late ’33, they were built to order – eight the first year, nine in ’32, 22 in ’33. Then, artists started asking for larger, louder instruments to use for radio performances, and demand swelled enough that Martin shifted them to a production model; 138 were produced in 1934, 218 in 1935. At the beginning of ’34, the company also took the opportunity to update the design to 14 frets clear of the body (the first 14-fret D-28 appears on logs in January, 1934, the first production batch that March).

After that point, Martin never looked back and production steadily increased, remaining strong even through World War II.

On January 21, 2016, Martin celebrated the centennial of its dreadnoughts with a party at Disneyland and launch of the DR Centennial model, a limited-edition tribute to the humble Ditson that started it all.

Special thanks to Greig Hutton.