Is there any more stylish vintage amp than the V-front Watkins Dominator? This creation is delightfully twee yet utterly enticing – the allure of its blue-and-cream Rexine covering, gold-threaded grillecloth, and thrusting wedge aesthetics virtually irresistible – and it screams from an age when rock and roll was barely a big-stage event in Britain.

Looks aside, the Dominator was the flagship of a pioneering maker who, like Leo Fender in California a few years earlier, was one of the first to address the needs of a new breed of guitarist. And if the industry was on the cusp of a revolution, guitarists still owed thanks to Watkins for helping them reach this point.

Accordionist-turned-entrepreneur Tom Jennings and his company, Jennings Musical Instruments (JMI), had been in the musical-instrument game for a short time and had yet to begin thinking in terms of the electric guitar when another accordionist, Charlie Watkins, was seeing potential in this new instrument. After returning from service in the Merchant Navy, Watkins, a native of Balham, in Southeast London, made a living for a time playing the accordion in small bands. As with so many musicians, however, he eventually saw the need for a “proper job.” 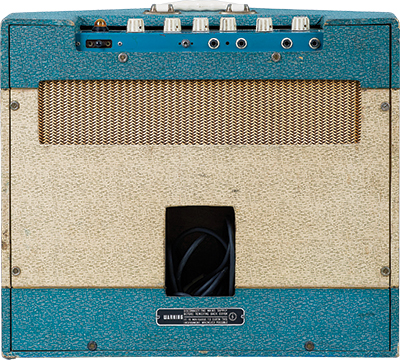 In 1949, he opened a record shop with his brother, Reg, in London’s Tooting Market. In ’51, they moved to a slightly larger premises in Balham, where they also sold accordions and other instruments. Watkins cast a keen eye on the guitar’s potential insurgence while sympathizing with his fellow musicians’ inability to be heard amid the noise of horns and accordions. As he told Sound On Sound’s Gary Cooper in an interview that wasn’t published until after his death in 2015, “I thought, ‘I’ve put up with that long enough, I can do something about that; I’ll make an amplifier.’”

The first Watkins amps were built by local electronics jobbers. Like many others of the day, they were able to run on domestic AC or DC current; if used incorrectly, however, they could be extremely dangerous, even deadly.

“I’d sold about 20 of them by 1952, when one day I saw a piece in the Daily Mirror about a pop-group guitarist getting killed,” Watkins told David Petersen in an interview for The Guitar Magazine in May of 2000. “Being a fatalist, I thought, ‘It’s bound to be one of my amps’ – those AC/DC units were quite dangerous. I sent a telegram to the guy who was making them for me and got him to stop immediately. Somehow, I managed to recall all those I’d sold and replaced them with safe AC-only units.”

The scare put Watkins off the amplifier game for a time, but the need remained for a reliable (and louder) electric guitar, as one skiffle musician after another kept coming to the Balham shop.

Watkins returned to the venture in the mid ’50s by commissioning an AC-powered combo sold as the Westminster, which generated about 10 watts through a single 10″ Elac speaker. For ’56, the Westminster was briefly given a larger V-front cabinet, but by ’57 that format was exclusive to the new Dominator (the Westminster having returned to a more-standard rectangular cab). The new Dominator had two 10″ Elac speakers angled outward for enhanced dispersion, two channels – one for microphone, one for guitar (with tremolo), and a pair of EL84 output tubes to generate 17 watts – as much as a guitarist was likely to need at the time.

Watkins’ amps were generally more rough-hewn than those from competitors like Vox, Selmer, and (soon) Marshall, but a look inside this Dominator reveals it’s rather nicely put together. Components include a handful of the “mustard caps” enthusiasts drool over in vintage Vox and Marshall amps, while other parts are generally of good quality. Charlie Watkins’ desire to save a penny is well-documented, though, and a budget-friendly production ethos is evident; the main circuit board is an early printed type (PCB), and the first two preamp tubes are loaded onto their own printed board. Make no mistake, though, this is still very much a hand-wired amp; its components are in line with those employed by makers using turret and tag boards.

Owner Marcel Cavallé tells us the amp has a truly British sound.

“The mids and highs are sparkly clean, with warmth and depth,” he said. “Push the volume and you still have control, with a clear, round tone; and if you play with attack, the amp responds with a gratifying growl. It also has a fantastic tremolo that washes over you as you play.”

The V-front baffles do throw sound at an impressively wide angle, though there can also be a gap in its soundstage directly in front. Cavallé had the large filter caps replaced and installed some new tubes. The footswitch jack has been replaced by a toggle, for ease of selecting the tremolo effect. Otherwise, this beauty is delightfully original and impressively clean.

A couple years after its creation, Charlie Watkins removed his surname from the amps in favor of the acronym WEM – Watkins Electronic Music – which he felt more closely resembled the popular Vox logo. Around the same time, Watkins moved the Dominator into a more-sedate rectangular cab and would eventually remove tremolo from its feature set.

Into the ’70s, iterations of WEM’s cornerstone amp remained good-sounding, fun, and today are reasonably affordable. None, however, are as collectible as the stunning, angular original.