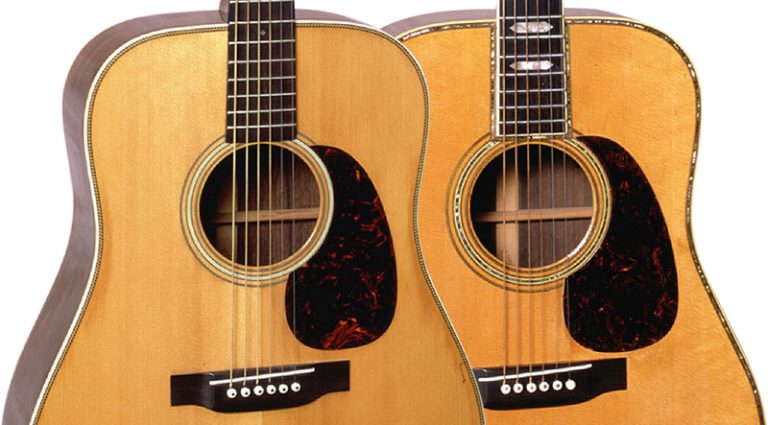 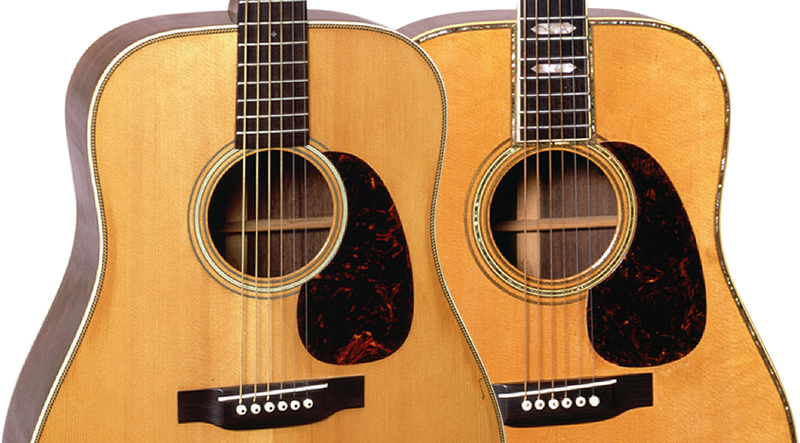 Prior to World War II, only three dreadnought guitars were featured in the Martin catalog – the D-18, D-28, and D-45. The two with rosewood back and sides, the 28 and 45, have both been inducted into the Vintage Guitar magazine Hall of Fame.

Dreadnought-sized guitars were first made by Martin for the Oliver Ditson Company, a retail and wholesale distributor with outlets in Boston and New York. The Ditson Company distributed instruments made for them by several different makers, however, those most prized today are the ones made by C.F. Martin. Ditson had Martin produce a variety of models, including ukuleles, mandolins, and guitars. The Ditson/Martin guitars and ukes featured a distinctive body shape with a less pinched-in waist than standard Martins and had distinctive Ditson-style soundhole rosettes. The dreadnought shape is actually very much in line with the typical Ditson specifications.

Ditson guitars made by Martin were offered in three body sizes, each available in three levels of ornamentation. All featured 12-fret necks with slotted pegheads, so dreadnoughts were essentially the same size and shape as the modern 12-fret style D guitars. The smaller Ditsons, and even the ukuleles, looked very much like miniature versions of the 12-fret D-sized instruments.

The first of the Ditson/Martin dreadnoughts were produced in 1916. These earliest instruments had fan bracing very much like a classical guitar. Subsequent Ditson/Martin dreadnoughts had X bracing. Ditson-style dreadnoughts were discontinued after January ’21, however, in June ’23 the company asked Martin to begin production again on the style 111 mahogany dreadnought guitar. Between then and ’30, 19 more of this style were produced. Martin-made Ditson dreadnoughts are extremely scarce. Although Mike Longworth’s research of Martin records reveals seven of the style 111 mahogany dreadnoughts and seven of the style 222 early dreadnoughts, as well as his statement that 19 111s were produced between ’23 and ’30, these instruments are so scarce I have personally seen only three. While they obviously had little direct impact on the market due to the fact they are so scarce they have not been used by many musicians, these instruments are historically very important as the first dreadnought Martin guitars and as the inspiration for Martin to produce subsequent dreadnoughts under their own name.

1931 marked the introduction of Martin brand D-sized guitars. Previous Ditson models did not have a “D” designation. Rather than stamping the neck block “0000,” which seemed awkward, the ’31 models were named after the largest British battleship, the Dreadnought, hence the “D” stamp. Two models were offered, the D-1 equivalent to a 12-fret D-18, and the D-2 equivalent to the 12-fret D-28. These are extremely scarce instruments. Longworth’s research indicates only two D-1s were produced in ’31, and none after that, whereas he shows four D-2s in ’31, two in ’32, and one in ’34. The best-known D-2 is one made for the performer known as “Arkie” the Arkansas wood chopper who performed on WLS radio in Chicago. This guitar is inlaid “Arkie” on the fingerboard and is now on display at the Country Music Hall of Fame in Nashville.

In ’34, Martin altered the specifications of the dreadnought guitars to the 14-fret version with the body style still in production today. The 14-fret specs were in line with changes taking place throughout Martin production. The OM models with 14-fret neck first introduced in late ’29 had become so popular Martin decided to utilize this basic design throughout much of its model line. The ’34 14-fret D-18 and D-28 were the first dreadnought guitars featured in Martin catalogs.

The pre-WWII D-18s and D-28s conformed to typical Martin specs of the period. Early ’34 models were fitted with bar frets and had an ebony reinforcement in the neck rather than a steel T bar. By the end of ’34, specs on dreadnoughts and other models were altered to feature a steel T bar reinforcement in the neck and modern-style frets. The ornamentation of the pre WWII D-18 conforms to the typical specifications of the style 18 models throughout the Martin line with mahogany neck, back, and sides, Adirondak spruce top with scalloped bracing, ebony fingerboard and bridge, and dark body bindings, whereas the style 28 similarly conforms to standard 28-style specifications of the period with Brazilian rosewood back, sides, and peghead veneer, mahogany neck, Adirondak spruce top with herringbone trim and scalloped bracing, ebony fingerboard with slotted diamond inlays, “zipper”-style backstripe and white ivoroid body bindings.

In mid ’39, Martin altered neck dimensions and narrowed the string spacing on all 14-fret models and altered the position of braces from the so-called “high X” pattern to the “low X” pattern in which the juncture of the main X is further from the soundhole. In late ’44, scalloping of the bracing was discontinued and the fingerboard inlays were changed from slotted diamonds to small dots. In ’46, Martin continued to use herringbone trim on the tops. However, they altered the specifications from Adirondak spruce to Sitka spruce and larger dots were used on the fingerboards. After the first production run in ’47, herringbone trim was discontinued and the D-28 guitars subsequent to that time were bound in the standard post-WWII style. The D-18s underwent the same changes in neck dimensions, string spacing, and bracing as the D-28s. D-18s continued to feature ebony fingerboards through ’46, whereas other style 18s had gone to rosewood fingerboards as of about ’40.

The first D-45 (serial number 53177) was made for Gene Autry in ’33 as a custom order. It features a 12-fret slothead neck with the typical Martin torch inlay used on early style 45s, and has the “Gene Autry” inlaid on the fingerboard. This instrument is now on display at the Gene Autry Museum of Western Heritage in Los Angeles. A second 12-fret D-45 was made in ’34 for a performer named Jackie “Kid” Moore in Milwaukee. It has a solid peghead. Another solid-peghead 12-fret D-45 was produced as a custom order in ’37. While these are obviously exceedingly scarce instruments, all three have survived and have been carefully examined by knowledgable professionals.

In ’36, two 16 ¼" are at least strongly influenced by the Martin originals.

And the D-18, though less ornamented, should be viewed on par with the other two. Many fine musicians have found the mahogany back and sides of the style 18 produces an extremely fine midrange sound often deemed superior in the studio to rosewood instruments, which tend to have more “boom” and rumble.

D-18s from the 1930s are incredibly fine instruments that compare favorably to similarly-aged D-28s and D-45s in tone, volume, and projection. Although they are less elaborately ornamented, they are beautifully crafted, wonderfully functional musical instruments deserving of attention from the most discriminating players.

This article originally appeared in VG April 2000 issue. All copyrights are by the author and Vintage Guitar magazine. Unauthorized replication or use is strictly prohibited.