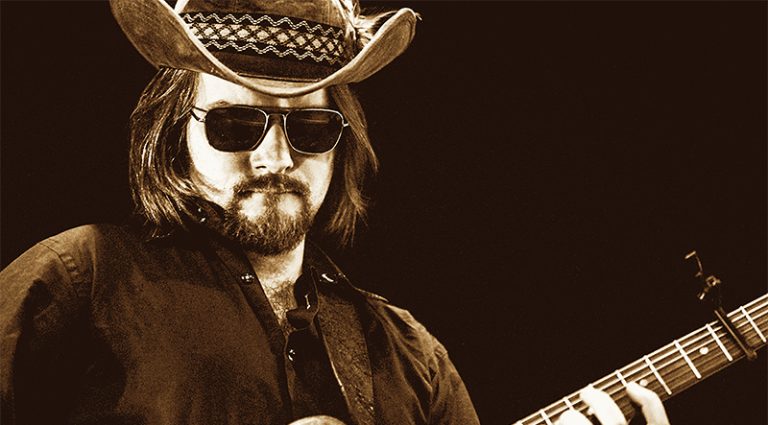 The time-worn, well-trodden path to Nashville traditionally starts from a Tennessee holler, Arkansas cabin, or Texas jook. For Laur Joamets – the Teleslinger behind Sturgill Simpson – it all began in his native Estonia.

On two self-released albums, Simpson has proven himself one of the best things to hit Americana music in recent times. At first, his keening vocals and hard-driving bluegrass-tinged playing were dismissed by the Music City establishment as too country for country. Fans said otherwise.

Joamets’ picking is vital to the vibe; the music is made special by breathless runs, classic country riffs that somehow sound fresh, and an intriguing accent of hard rock and psychedelia.

“In Nashville, you have your pick of pickers, but Sturgill must have heard something different in my playing,” Joamets explains before hitting the stage in the midst of the band’s world tour. “I think he was taking a really big risk hiring me. I play guitar with my Eastern European accent, and I wasn’t so fluent at playing country.”

Joamets was raised on a healthy diet of Jimi Hendrix, the Rolling Stones, and Deep Purple, but his guitar-picking dad didn’t neglect introducing him to country pickers like Albert Lee, Danny Gatton, and Redd Volkaert.

“When I started playing country, I began seeing lots of similarities with the blues and rock and roll I grew up playing, and I started really enjoying the music,” he says.

Country has a quirky history in Estonia. “No one understands the country sayings or the accents,” Joamets explains. Still, the sound is hot: Artists borrow classic melodies, write lyrics in Estonian, and re-record the songs.

Joamets played professionally in the “Pop Idol” TV-show studio band – think “American Idol” in Estonian – and on cruise boats and at shopping-mall openings. “Whenever we played an anniversary or wedding, we’d have to play two country songs – ‘Folsom Prison Blues’ and ‘That’s All Right,’” he says.

So, how did Joamets go from playing Baltic weddings to joining Simpson’s band? Coincidence. Simpson’s manager, Dave Cobb, also managed the Rival Sons, who played Estonia, and he crossed paths with Joamets. One thing led to another, and Joamets traveled his unique path to Nashville in 2014 to audition for the gig.

“I try to keep my influences from Hendrix, Deep Purple, and the Stones there in my country playing because there are so many better country guitar players then me, so as far as I’m concerned, the best thing I can do is play my own way,” he says.

Simpson is also a fine picker – he played all the guitar on his debut, 2013’s High Top Mountain. But on his follow-up, 2014’s Metamodern Sounds In Country Music, Joamets led the charge with stellar slide work on “Living The Dream” and the psychedelic freak-out ending “It Ain’t All Flowers” that’s unprecedented in country music.

Joamets’ primary guitar is a lightweight black ’74 Tele made of swamp ash with a rosewood fingerboard that he found years back in a Stockholm guitar store. He also picks a parts Tele given him by Simpson with a Warmouth body aged by MJT, maple neck, and – hold your breath – Lollar Jazzmaster P-90s. “It’s got a good, compressed twang that works perfectly for this music and sounds different from just a regular Tele as well,” Joamets explains.

He recently began playing a Fano PX6 that’s like a bizarre marriage of a non-reverse Gibson Firebird and Jazzmaster. Fitted again with Lollar P-90s, Joamets declares its tone “amazing.”

For amps, he prefers low power. “I like natural tube compression and a little breakup,” he explains, so he cranks the loud dial. In the studio, he employed a hot-rodded late-’60s Fender Champ. For live gigs, he uses a ’74 Fender Musicmaster with a 12″ speaker, 10 watts of power, and just Volume and Tone controls. “It was originally a bass practice amp, but of course Fender has a history of bass amps getting stolen away by guitar players!” he says.

He’s also experimenting with a prototype 15-watt Charmer amp that is based on a tweed 5E3 Deluxe as built by his father and a friend, Urmas Anderson.

Joamets’ effects are minimal. For slide, he kicks in a Greer Amps tremolo pedal “to add just a little bit of movement.” He has a Greer Lightspeed Organic Overdrive “which I use when we really start rocking” and a Greer Black Tiger Delay he says is “one of the best-sounding delay pedals I’ve ever heard.”