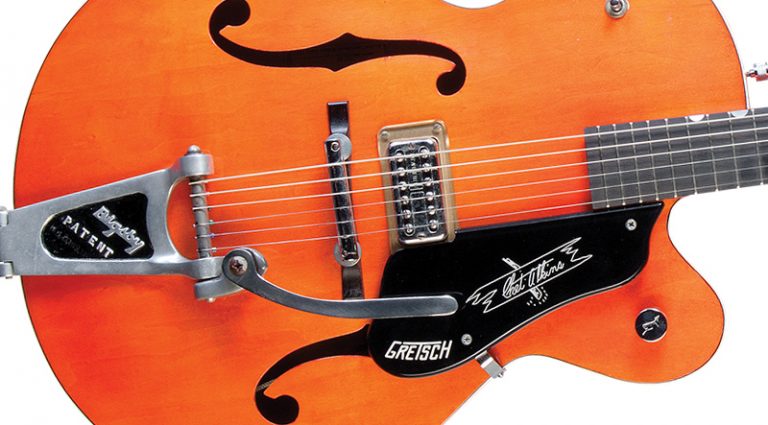 Chet Atkins was the most important endorser ever employed by the Gretsch company. When introduced in the 1950s, models bearing his name were admired and played by many artists including Hank Cochran and Duane Eddy, both of whom helped drive their popularity. And while The Beatles played a huge role in driving the sales of many instruments, George Harrison and John Lennon were influenced to play Gretsch guitars because they admired Atkins.

In 1954, Gretsch introduced the hollowbody Chet Atkins 6120, followed by the “Chet Atkins solidbody” in ’55. A guitar much like the company’s Duo Jet, with no sound holes and a body similar in size (and shape) to a Gibson Les Paul, it was, in fact, a hollow instrument.

The 6120 and Chet Atkins solidbody were given deluxe ornamentation and clearly intended to be high-grade instruments suitable for professional use onstage or in the studio. The ornamentation of the early 6120 and Chet Atkins solidbody was essentially the same as on the Gretsch Roundup, with engraved cows-and-cactus inlays on the peghead and fingerboard. The Rancher flat-top acoustic shared the Western-theme ornamentation; in addition to the cows-and-cactus inlays, it had an orange finish and the “G-brand” logo on the top. Though the Roundup and the Rancher shared the ornamentation as the two Atkins models, they were not Atkins-endorsed.

Over the years, the ornamentation evolved, first with the elimination of the engraving on the inlays, and by ’57, these instruments featured hump top block fingerboard inlays, a horseshoe peghead inlay, and the G brand was eliminated from the top. By ’58, the block inlays were replaced with simple neoclassical style “thumbprint” inlays on the bass side of the fingerboard. In an effort to reduce feedback, 1958 models also had a thicker top and trestle bracing.

The Gretsch Chet Atkins Tennessean was introduced to the line as an affordable alternative to the higher-end models. While it was the same size and shape with similar specs including a hollow, laminated-maple body, f-shaped sound holes, maple neck with dark center lamination, and 6120-style thumbprint fingerboard inlays on the bass side, this was the only Atkins-endorsed model with just one pickup, and it had less ornamentation. Typical of 1958, it has a Filter’Tron double-coil pickup of the same style used on the more-deluxe Chet models of the same year, placed in the bridge position, which is ironic given that Atkins favored the neck-position pickup. While the top and back of the body were bound, and it has the same bridge and Bigsby tailpiece as other Atkins models, the peghead and fingerboard of the early Tennesseans were unbound. The pickguard is constructed of Plexiglas with Atkins signpost logo, Gretsch logo, and black back-paint, whereas the other Atkins models that year had gold back paint on the guards.

The 6119 Chet Atkins Tennessean went through significant evolutionary changes. The early version like this example is specified in the catalog as 16″ wide, but most vary from 15⅝” to 15⅞” and have a body depth of 2 11/16“. There’s a three-position Tone switch on the bass side of the upper bout and a master Volume knob with engraved G-arrow logo on the treble horn. It has a 24½”-scale ebony fingerboard with neoclassical pearl “thumbprint” inlays on the bass side. The peghead bears a pearloid Gretsch logo inlay, but has no other ornamentation. The orange finish on this ’58 is virtually identical to the 6120 hollowbody and Atkins solidbody models, but with the exception of a few very early examples such as this, most single-cutaway early Tennesseans have a Cherry Red finish.

By ’59, this and numerous other Gretsches were given a zero fret. By late ’59, Gretsch had purchased Bigsby tailpieces bearing the Gretsch and Bigsby logos. In ’61, the specs of the Tennessean were altered to include a 2¼”-deep body, painted on simulated f holes on a dark cherry-walnut stain, two single-coil Gretsch Hi-Lo’Tron pickups, master Volume knob on the cutaway bout, three-position pickup selector, Tone toggle on the upper bass about, two Volume knobs on the lower bout, and white binding on the fingerboard and top of the body (none on the back). By ’62, the depth was reduced to 2″, and the model continued to evolve, but those of interest to collectors were made prior to the late ’60s.