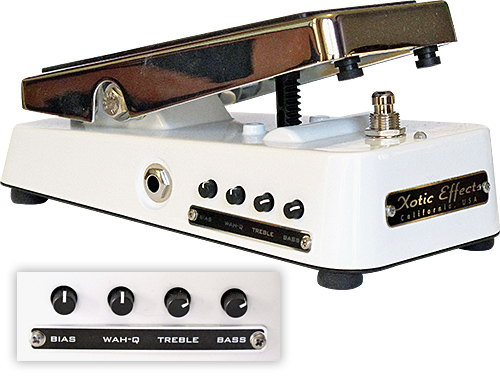 The chase for tone sometimes seems like never-ending “Tom and Jerry” reruns.

Enter Xotic Effects and their better mousetrap: the XW-1 wah. That wily rodent Jerry just saw his life pass before his eyes.

It’ll come as no surprise that the Xotic is based on the Holy Grail of wahs: the pioneering Vox Clyde McCoy of 1967-68. But while those early are pedals are basic, crude units, the XW-1 is refined and oh-so smart. Its talents include an active two-band EQ, biasing and Q control, true-bypass switching, and a self-lubricating pivot – all within a smaller footprint. That self-lubricating nylon bushing pivot is invaluable. Many a wah that goes south is opened up to reveal internals clogged with lint.

Plugging in, we were thrilled by the XW-1’s smooth, articulate action. It feels like the throttle of a Ferrari. And if it’s too easy for your toe, it includes adjustable rocker tension and a rubber bumper to shim the travel range.

On the pedal’s side are four small control knobs: Bias, Wah-Q, Treble, and Bass. And those knobs are indeed tiny (our sole criticism), although you can’t fault what they do.

Bias controls the voltage to the circuit, which dramatically alters the wah’s voice. Tweak the bias to add more juice and brighten the tone, or notch it down to make it sound like the McCoy running on an alkaline battery.

Wah-Q adjusts the width of frequencies that the pedal filters, shaping the sound wave from a wide bandwidth to a narrower, more vocal-like effect, and the two-band Treble and Bass EQ provide +/-15 decibels of boost or cut to each frequency.

Add it all up, and the possibilities are nearly limitless. We dialed in Jimi, summoned forth aggressive Joe Bonamassa sweeps, and moved from vintage Vox trumpet tones to the funkadelic stank of a Mu-Tron III.

One more cool feature: the XW-1 features a buffer circuit that is “fuzz friendly,” as Xotic puts it in technical terms even a guitarist can comprehend. This makes the modern effect play well with vintage fuzzboxes.

Build quality is exemplary. The true-bypass relay uses gold contacts, providing transparent bypass plus reliable switching that Xotic promises will last one million clicks, minimum. The XW-1 can run on a 9-volt battery or power adapter. An LED on top flashes when battery power dips below 50 percent.

It’s those little touches that make this a truly better mousetrap.