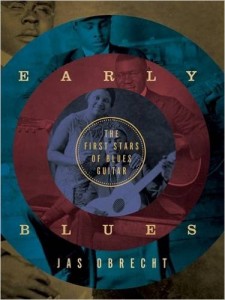 When did blues guitar begin? Many people think of Charley Patton, but in this book historian Jas Obrecht teaches us the idiom began long before that Delta legend – back to the turn of the century, if not further.

The well-researched but highly accessible narrative breaks down prewar blues by looking at the pickers’ personal histories and using their 78-rpm recordings as evidence, along with U.S. census data and anecdotes from John Lee Hooker, Johnny Shines, and Ry Cooder, among others. Posters and trade advertisements for blues musicians and “race records” also abound, many of them painfully racist by today’s standards. (These record ads further reveal how labels and press agents created the bad-boy guitar persona that – real or exaggerated – is still prevalent today.)

What emerges is a portrait of the music far beyond standard 12-bar progressions: the music came from a web of field hollers and work-song calls, spirituals, ragtime, folk, and country-blues styles, as well as specific regional variants from Mississippi, Texas, Georgia, and other southern and western states. The complexity of the guitar music is breathtaking and not, as some mistakenly assume, primitive. If you think old-school acoustic bluesmen were unsophisticated, you’ve never heard the powerhouse picking of Blind Blake or Lonnie Johnson.

Obrecht further illustrates how recording technology and music marketing evolved in the ’20s, carving out the record industry as we know it, in tandem with the rise of radio. Perhaps it’s no coincidence that the first guitar heroes arose with this technology shift and, accordingly, the author dives deep into the work of six-string banjoist Papa Charlie Jackson, Blind Lemon Jefferson, Mississippi John Hurt, Tampa Red, and Blind Willie McTell. Their stories are fascinating.

Still, it’s heartbreaking to read about the hardscrabble lives of musicians in the Jim Crow south. Case in point, the great Blind Willie Johnson reputedly died of malarial fever trying to survive in the shell of his burnt-out home. The local Texas hospital refused to treat him because he was blind.

This history covers a lot of ground, but we’re lucky in the 21st Century to have so much of this vintage music readily available via the Internet. You can read about the first blues hero – Sylvester Weaver – here and then surf online to find recordings from his brief career – notably 1923’s revolutionary “Guitar Rag.”

In short, if you love the blues you owe yourself a journey into its primordial years. No question, Early Blues is a fine place to begin exploring this rich, complex American music.