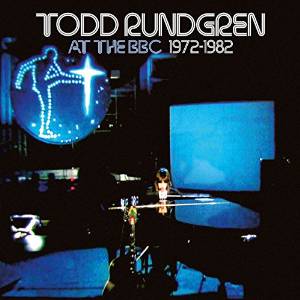 Todd Rundgren gets the BBC archival treatment, and the results are fantastic. This three-disc, single-DVD set of radio and TV performances is a perfect showcase for the dichotomy that is Todd – pop star and prog-guitar god. It’s a must-have for any fan.

Rundgren’s pop history is well known – and it’s well represented here, from his first Radio One “In Concert” performance in ’72 (“I Saw the Light,” “Hello, It’s Me”) to his ’82 “Old Grey Whistle Test” TV appearance (“Can We Still Be Friends?”). Note: The latter includes a track with Rundgren playing Eric Clapton’s famed “The Fool” SG, which he owned at the time.

Rundgren’s tenure with Utopia, the ever-morphing progressive-rock outfit he assembled so he could focus on his guitar playing in a fully democratic effort (all members wrote songs and sang), is more intriguing. Again, the DVD is key. Check the ’75 Utopia performance with Luther Vandross on background vocals, and an over-the-top version of “Singring And The Glass Guitar” from the 1977 Bearsville Records Picnic. It features the group’s elaborate Egyptian-themed stage show and climaxes with Rundgren soloing fiercely atop a 22-foot-high pyramid.