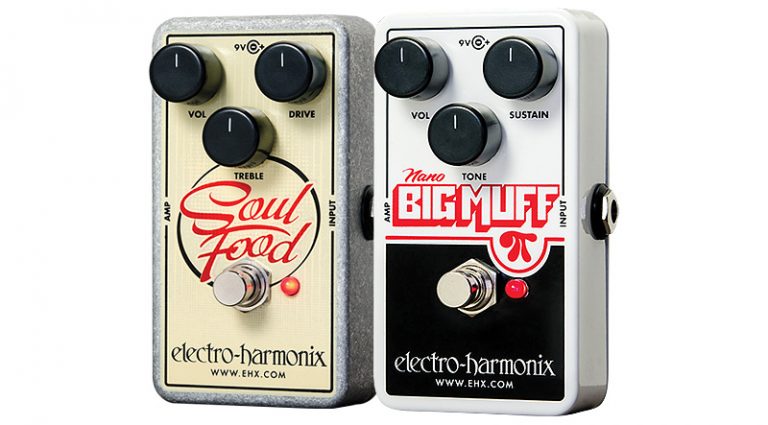 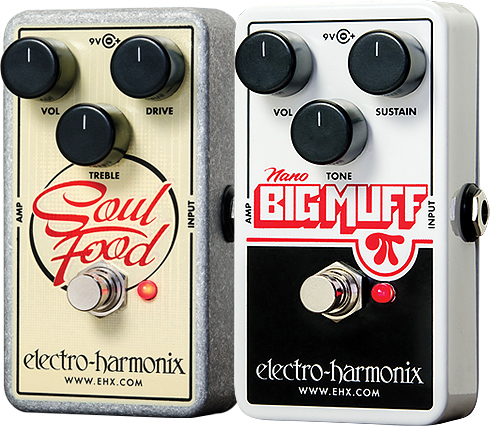 Guitarists have an insatiable desire for overdrive and distortion pedals, and manufacturers seem to be responding with more models every day. Two of the latest to roll out are the Soul Food and Nano Big Muff stompboxes from Electro-Harmonix. Both units feature a small-footprint chassis, sized more like an MXR box than EHX’s traditionally larger designs. But both are packed with tone and available at affordable prices.

As Electro-Harmonix bluntly admits, the Soul Food is their version of the revered, almost mythical Klon Centaur. In the ’90s, that pedal defined the kind of high-end boutique overdrive that many guitarists would soon crave for their tube amps – a transparent overdrive that embellishes the natural flavors of the amp rather than covering them over with fuzz or distortion. In cooking, it would be the difference between adding just right amount of salt and pepper to liven up a dish and smothering it with a heavy sauce. For a certain type of tonehound, the original Klons were the ultimate salt ’n’ pepper flavoring, providing the spice needed to tweak EQ and gain until their ears were tickled pink.

The Soul Food offers the same approach: a simple, rugged, clearly voiced overdrive for substantially less money than a Klon Centaur (original Centaurs sell for at least $1,000). Like the Centaur, the Soul Food is not for over-the-top saturation junkies, but rather for old-school sounds like a Les Paul through a non-master volume Marshall 100-watt head, or a Strat through a Fender Bassman. There are plenty of boxes out there for the gain-loving rocker, but this isn’t one of them; the Soul Food is meant to create cool sounds by working between a tube amp and the guitarist’s playing dynamics. (And it should be emphasized that the unit isn’t really made for solid-state amps, per se. Yes, it will work, but the magic really happens with a good tube amp.)

The Soul Food has just Volume, Drive, and Treble controls. The Drive gives light-to-moderate dirty tones, while Treble controls the sheen over it. Look for warm, vintage tones that bring to mind the sounds of Mike Bloomfield, Bluesbreaker-era Clapton, Jimmy Page, Peter Green, and early Angus Young. Jamming for an hour or so with the Soul Food really lets you savor the subtlety of sweetly driven amps, evoking a period before Van Halen put high-saturation overdrive on the map. Some purists will argue that the Soul Food isn’t an exact replica of the Klon Centaur, but it’s a great deal at this price and a cool addition to any pedalboard. Indeed, every guitarist needs a pedal that brings out the flavors and lets some real tube tones and – key word – dynamics ring through.

On the flip side, the Nano Big Muff is anything but subtle. With Volume, Sustain, and Tone controls, this small pedal claims to shrink the circuitry of the legendary Big Muff into a smaller package. Indeed, the Nano Big Muff packs a ton of musclebound tone, bringing to mind Jimi Hendrix, the most famous user of its big brother. Much like that classic big-box NYC Big Muff from 40 years ago, the Nano Big Muff has wild distortion tones lurking within its hull, as well as the trademark “singing sustain” that made the original such a revered fuzzbox. It’s astounding how well the Nano conjures Hendrix tones on the neck humbucker of a Les Paul – quite an impressive feat considering Hendrix played a Strat. Somewhere in its circuitry, the Nano also has stack-like properties – not quite a 4×12 cabinet simulator, but enough low-end chunk to make one think it’s intentional. Another asset of the Nano Big Muff is that it’s housed in a bulletproof steel case, unlike the original Big Muffs of yore, which were not nearly as rugged. No question, this box sounds ferocious and is pedalboard-ready. In fact, it’s hard to unplug.

On the whole, with the Soul Food and the Nano Big Muff, Electro-Harmonix offers a nice pair of overdrive stompboxes. It just depends whether you want soulful and edgy or unbridled and wild. At these prices, why not both?