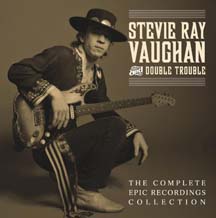 One of the greatest blues guitarists of any era, Stevie Ray Vaughan’s recorded output with his band, Double Trouble, consisted of only five albums (four studio, one live) during his lifetime. And though he hit the scene like the self-described hurricane in his adaptation of Eddie Jones’ “Guitar Slim,” there were inconsistencies in the albums released both before and after his death in 1990. This 12-disc set compiles all of Vaughan’s studio and live albums, along with a double-CD of tracks that saw the light of day posthumously on various albums. His celebrated performance at Toronto’s El Mocambo club in 1983 makes its CD debut here, under the title A Legend In The Making.

Already a seasoned live band (illustrated on a radio simulcast posthumously issued as In The Beginning), for their storied appearance at Montreux, the audience booed, mainly because of the band’s volume – and invariably, Vaughan’s reaction was to play louder and faster.

Intended as a demo, the trio set up in Jackson Browne’s rehearsal facility as if they were onstage and cut Texas Flood. Once through, a dinner break, then another run-through, with a few vocals later replaced. It was beautifully raw.

Like many acts that experience sudden stardom, needing a followup while the iron is hot, Double Trouble relied on the rest of its club material for Couldn’t Stand The Weather. Though aided by the original title track and “Cold Shot,” dating from Vaughan’s pre-Trouble aggregation, Triple Threat Revue, the results from New York’s Power Station can’t top the sound achieved on Flood.

Manager Chesley Millikin promised he’d get Vaughan into Carnegie Hall for his 30th birthday, with tape rolling. The only conceivable reason for not releasing it at the time is that it was too early to have a live album consisting largely of songs from only two LPs released thus far.

Despite accounts of “mounds of cocaine” in the studio and endless hours of re-takes and knob twiddling, Soul To Soul is one killer album – two big reasons being the addition of keyboardist Reese Wynans and songs penned by Doyle Bramhall (Sr.). But, the drugs torpedoed what at another time could have been an awesome album; Live Alive, from ’86, was so bad that overdubbing “fixes,” to the point that almost nothing was actually live, could save this audio portrait of Vaughan’s downward spiral.

The good news is that, newly clean and sober, In Step is as good as Alive is bad. Vaughan’s guitar tone sounds small compared to previous work, but his four collaborations with Bramhall and his instrumental masterpiece, “Riviera Paradise,” outweigh any sonic shortcomings.

Since this is under the Stevie Ray Vaughan and Double Trouble moniker, nothing from the Vaughan Brothers’ Family Style is included. And although three posthumously released live albums are included, the first album of previously unreleased material to hit shelves after Vaughan’s death, The Sky Is Crying, is woven into the double CD titled Archives. Here, it becomes apparent that “complete” isn’t an accurate description of the box’s contents. In addition to Sky, cuts from the expanded reissues of Flood, Weather, and Soul are included, along with some but not all of the songs that first surfaced in 2000 on the SRV box. But the cover of the Beatles’ “Taxman” (oddly chosen to open 1995’s Greatest Hits) and the Saturday Night Live rendition of “Change It” that appeared on Solos, Sessions and Encores are nowhere to be found.

As for albums that could still be added to Vaughan’s catalog, the latter includes a teaser from a Nashville session by an earlier incarnation of Double Trouble, with Lou Ann Barton belting “You Can Have My Husband” with more swagger than its composer, Irma Thomas. Even though the band was jacked up on speed to make the drive from Austin, the album’s worth of tunes is similarly hot, including the best version of “Rude Mood” Vaughan ever committed to tape. Along with live recordings at Fort Worth’s Bluebird and booted recordings of Triple Threat, the Nashville album deserves to be released.

Stevie’s life and career may have ended, but his catalog is still not complete.