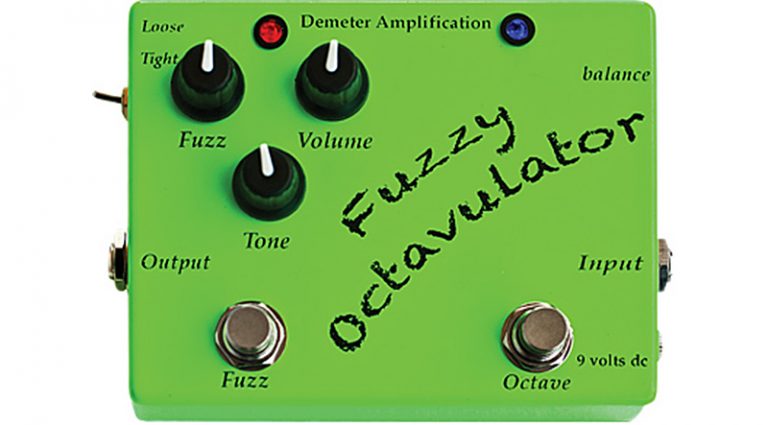 James Demeter has a long history in the amp and effects biz. His project-boxed/Dymo-labeled Tremulator pedal pre-dates the ’90s boutique pedal explosion by more than a decade. During his 30 years of 100-percent analog designs, Demeter has produced everything from studio-quality rack effects and multichannel tube amps to a wide variety of first-class vintage-flavored stompboxes that can be found on the pedal boards of the rich and famous. The FZO-1 Fuzzy Octavulator uses Demeter Amplification’s highly regarded Fuzzulator circuit, and also offers an Octavia-style high-octave effect that can be used in conjunction with the fuzz and on its own.

The FZO-1 features the standard Fuzz, Tone, and Volume controls, as well as on/off Fuzz and Octave footswitches. Two LEDs indicate which circuit or circuits are active, and a side-mounted mini-switch with Loose and Tight positions changes the character of the fuzz via germanium (Loose) and LED (Tight) clipping stages.

Along with input and output jacks, the FZO-1 has a side-mounted trim pot labeled “Balance” that adjusts the overall output stage of the pedal to allow the user to goose up the output if they tend to stay in the lower-output Loose mode, or to back it down if they settle in on Tight. Under the hood, the pedal is very neatly wired, utilizing through-hole construction, which means unlike surface-mount designs, this pedal is repairable rather than being consigned to junk if a grain-of-sand-sized cap or resistor decides to quit. Additionally, all pots and jacks are chassis-mounted instead of board-mounted, giving the pedal much greater durability. The pedal can operate on either a 9-volt battery or DC power supply.

The Octavulator was tested with a Les Paul and a Strat-style guitar and both a Fender Deluxe Reverb and a Vox AC15. Beginning with the fuzz section dialed into a low Fuzz setting, all three knobs showed very useable ranges, producing a wide variety of fuzz levels and the ability to match or boost from bypass level. The Tone knob certainly aided in the switch from single-coils to humbuckers, while the Tight/Loose toggle allowed switching between two very distinct vintage fuzz flavors. But, the Tight setting proved the favorite for full-on fuzz because it stayed tight and useable, never getting bass-heavy or out of control. Not to say that the Loose setting really loses anything – it merely has a bit more harmonic swirl going on and a bit more cushion to the attack. In fact, with the Fuzz level set low, the Loose setting produced a wonderfully natural overdrive flavor.

Activating the FZO-1’s octave section brought on all the Octavia-styled tones that one would hope for, with one exception: The octave actually tracks anywhere on the neck. With vintage Octavias, as well as copies, tracking can be somewhat dubious and very sensitive to the type of pickup, pickup position, and where on the neck the instrument is played. The FZO-1 suffers none of those limitations. Another bonus is the option of activating the octave section alone, a feature that most fuzz/octave pedals do not allow. By itself, the octave can create unique clavinet and other keyboard-styled tones using various pick and finger techniques that create tones both ear-catching and useable.

The FZO-1 Fuzzy Octavulator is a fantastic-sounding and highly versatile pedal that offers the player the ability to switch between two distinct clipping flavors and to use the fuzz and octave either together or separately. The warm and vintage-style fuzz unit also happily excels as an overdrive, and the octave’s spot-on tracking gives it a huge leg up over the old-school Octavia.