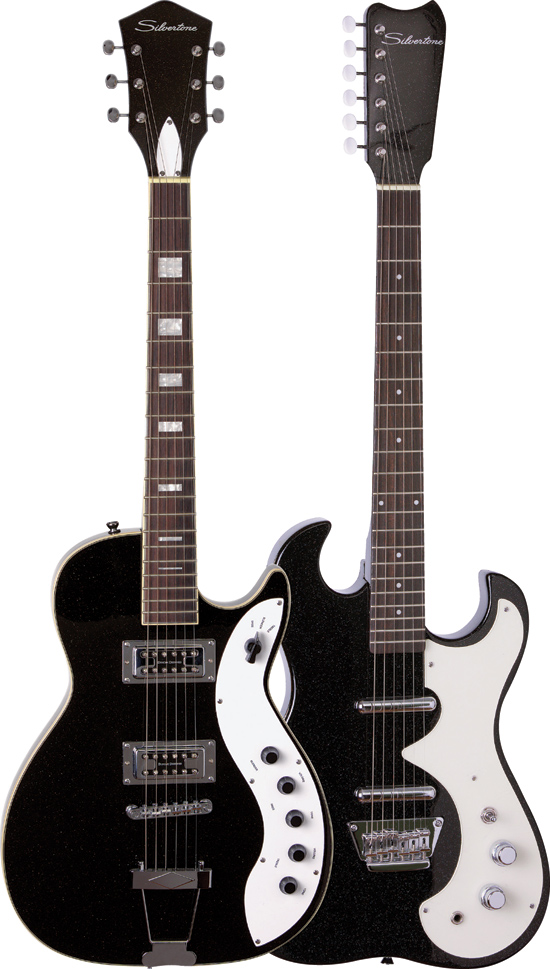 With an up-swell of interest in vintage Silvertones, current parent company Samick has begun to reissue some of the most requested models. The first offering, the 1303/U2, with its famous “coke bottle” headstock and lipstick pickups, was followed by a Bigsby-equipped 1478, known for its Jaguar-influenced body shape. The latest offerings are the pivotal 1449 and 1423.

Originally offered in 1963-’64, the 1449 is a two-pickup version of the most popular Silvertone, the “beginner” 1448. Vintage models, some will recall, included a tube amp built into the case. While the reissue 1449 does not include a case with integrated amp, when compared to a pristine original, the feel of the reissue is nearly dead-on. Likewise, the reissue’s lipstick pickups are true to the sound of a vintage original. However, it must be noted that the sound of the vintage lipsticks varied greatly from guitar to guitar. According to Tony De La Rosa of Silvertone, the Samick folks sift through as many originals as is necessary to find an exemplary guitar on which to base a reissue.

The new 1449 has a full 24.75″ scale, and the pickups are controlled by the same stacked volume and tone controls as on the original. Perhaps the most obvious difference is that the reissue 1449 is made of solid mahogany rather than the original’s Masonite-covered pine frame. Plugged in, however, the difference is slim, with the vintage model having just a bit more woody lower midrange. Thanks to a modern dual-action truss rod, sealed tuners, and a through-body bridge with individual string saddles, the reissue can be made to tune, intonate, and play consistently. (The same can seldom be said of a vintage example.) Like the original, the fingerboard is rosewood, but the original’s aluminum nut is replaced with polymer.

In use, the new 1449 produces nearly the same tones as the original – perfect for a working guitarist who desires the tone and aesthetic appeal of an original but requires consistency and the ability to fully tweak action and intonation.

The Silvertone 1423 Jupiter adds ivory binding to the neck and body and sports a trapeze tailpiece and tune-o-matic-style bridge. Where the original (known as the Jupiter H49 in the Harmony line) featured DeArmond-made pickups, the new Jupiter has Seymour Duncan-designed Filter’Tron-style humbuckers. The control arrangement is exactly as the original’s, with individual Volume and Tone knobs for each pickup and a three-way chicken-head switch for the bridge and neck pickup positions (labeled “Bass” and “Treble,” respectively), and an unusual middle position labeled “Blender” that engages both pickups and a passive circuit that rolls off highs and boosts mids, the frequency of which is varied by the blender pot. The effect is similar to a wah pedal, and the position of the control facilitates pinky-finger manipulation.

In use, the most notable difference between a vintage and reissue 1423 is the pickups. While DeArmonds were warm and woolly to an almost unusable degree, the reissue provides a wide range of contemporary and more usable tones. The feel of the reissue is also much more playable, with greatly improved action and intonation. The guitar covers diverse musical styles surprisingly well, and its retro looks definitely draw attention.