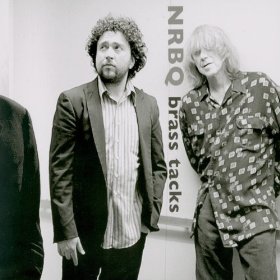 How many times and in how many ways can you call a band charming? Doesn’t matter who the players are, that word describes the ’Q to a T.

This is the second record by this version of the band, which features founder and keyboardist Terry Adams, Scott Ligon on guitar and banjo, bassist Casey McDonough, and drummer Conrad Choucroun. But it doesn’t seem to matter who the members are; the sound doesn’t change.

“Waitin’ For My Sweetie Pie” has the feel of a ’50s love song. “Sit In My Lap” is a lovely pop tune with a twangy guitar solo that brings the Beach Boys to mind. “Fightin’ Back” sounds like an outtake from the Buck Owens catalog. “Places Far Away” is a quirky piano tune with an odd guitar solo that matches the musical feel. And what other band could get away with a sincere, beautiful take on the old Rodgers and Hammerstein chestnut “Getting To Know You”?

A few years back, it looked like the band may have reached the end of the road. But 45 years after the first NRBQ record, Brass Tacks proves they’re still going strong with their irresistible mix of great music and plain-old fun.

The Elvin Bishop Group – Party Till The Cows Come Home