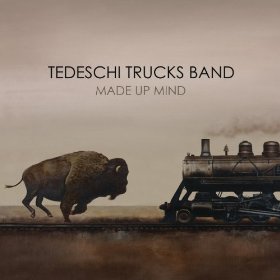 Tedeschi and Trucks have a supporting ensemble that’s from the top of the food chain: Tyler Greenwell and J.J. Johnson on drums and percussion, Saunders Sermons on trombone and vocals, Kebbi Williams on saxophone, Maurice Brown on trumpet, Mike Mattison and Mark Rivers on harmony vocals, and Koﬁ Burbridge on keys and ﬂute. Since the departure of bassist Oteil Burbridge, the band has played musical chairs with a great selection of top-tier bass players that includes Pino Palladino, Bakithi Kumalo, George Reiff, and Dave Monsey.

The title track pumps through the speakers with a jaunty slide riff while Tedeschi’s voice has simply gotten better and more resonant with each recording. Reminiscent of Bonnie Raitt, her voice is tough, sultry, and super soulful. The band plays with an organic ear-friendly mix of subtle horns and keyboards, with Trucks’ supernatural soaring slide in beautiful form. Particularly on “Do I Look Worried,” Trucks gets to really go for it as the band cooks, borrowing compositional cues from Screamin’ Jay Hawkins’ “I Put A Spell On You.” It’s a standout track.

They switch gears with “Idle Wind” with its acoustic guitar and the band’s cross-pollination of Led Zeppelin, Trafﬁc, and the Allman Brothers. The group sound – and especially Koﬁ Burbridge’s ﬂute – really make the track pop, reminiscent of a time when music had space and breadth.

The album’s single, “Part Of Me,” is a ﬁne vocal duet between Tedeschi and Saunders Sermons. It’s one of the highlights of the record with roots stemming from classic soul and R&B, including a tip of the hat to Muscle Shoals music of the ’60s and ’70s.

Co-produced by Jim Scott (Wilco, Johnny Cash, Red Hot Chili Peppers) and Trucks, Made Up My Mind is a warm, rich, and satisfying record with some of the most vocal guitar tones of Trucks’ career, particularly on the ballad “It’s So Heavy.” Tedeschi gets deep on “Sweet And Low,” while Trucks pulls a tonal switch with the gnarly intro riff to “The Storm.” It’s very much a beautiful ensemble record with perfectly blended brush strokes of B3, wah, and well-placed horn blasts. Trucks’ guitar is inspiring throughout.

The record closes with the acoustic/resonator slide ballad, “Calling Out To You.” It’s poignant, deeply Southern, and cinematic, as Tedeschi draws from a rich blues tradition of the best female vocalists that came before, while adding her own splendid touch. This album signals a step up from Revelator, displaying a band on a roll with enviable artistic integrity and deep southern conﬁdence.

Enrico Granafei – In Search of the Third Dimension