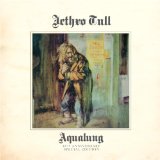 The year 1971 marked one of those seismic shifts in rock and roll, when critical LPs by the Who, Led Zeppelin, the Rolling Stones, Yes, and others blew away ’60s psychedelia and established a new paradigm based on melody, muscle and, frequently, grand conceptual themes. Right up there was Jethro Tull, who released Aqualung that year and quickly became an arena-sized act for the rest of the decade.

Disc 1 is presented here with a new stereo remix by Steven Wilson, the front man for Porcupine Tree, who has previously earned acclaim remixing the early King Crimson catalog. The tracks really pop in this version, notably Ian Anderson’s acoustic guitar work. All the favorites are here: “Aqualung,” “Cross-Eyed  Mary,” “Locomotive Breath,” and “Hymn 43,” each of which threaded the needle between the hard-rock muscle of Led Zeppelin and the artrock pastiches of Yes and ELP. On top of that, Tull wove in a certain Celtic/Elizabethan folk sound that contrasted Anderson’s genteel flute and acoustic work against the sledgehammer Les Paul riffs of guitarist Martin Barre. Even 40 years on, this formula is deadly and sounds stunning in the new Wilson mixes.

On Disc 2, look for a baker’s dozen of unreleased tracks, remixes, and rare material from 1970-’72, much of it quite good and interesting. If you’re truly a Tull devotee, there’s a grander “Collector’s Edition” that adds a premium vinyl LP and a DVD of historical goodies. If want more validation, check out various online chat lists and Amazon reader reviews, many of which are filled with glowing critiques for this 40th Anniversary version. A terrific set.