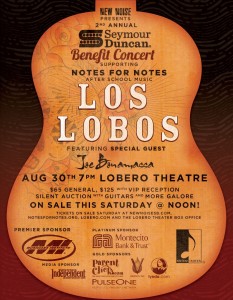 Pickup maker Seymour Duncan will host its second annual benefit concert, featuring Los Lobos and special guest Joe Bonamassa, August 30 at the Lobero Theatre in Santa Barbara. All proceeds from the event will go to the music charity Notes for Notes, which provides a place where kids can explore their creative side with free instruments, instruction, and a recording studio.

“We are so honored, again, to be able to put on this show with Seymour Duncan with such amazing artists that make a point of giving back just as much as they rock the stadiums,” said Notes for Notes founder Philip Gilley. Last year’s concert, which featured Steve Miller, raised more than $50,000, which allowed Notes for Notes to expand its centers into Nashville.

“Being an engaged member of a vibrant community like Santa Barbara entails that we give back,” said Cathy Carter Duncan, the co-founder and CEO of Seymour Duncan. “Our concert series is our way of supporting the community that has been our home for the last 36 years. Helping musicians by providing tools that inspire them to make great music is what we are all about.”

There will also be a silent auction of signed guitars and other rock-and-roll memorabilia.