Home Music Derek and the Dominos 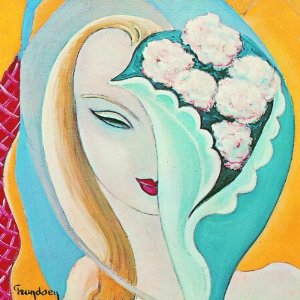 Many supergroups lack true superpowers, but Derek and the Dominos was the real deal. Burned out on the supergroup phenom after his troubled times in Cream and Blind Faith, Eric Clapton sought anonymity from stardom and its demands behind the moniker “Derek.” He also ached to get back to the companionship of a band of brothers allied in a love for crafting soulful music.

Derek and the Dominos formed out of the ashes of Delaney and Bonnie and Friends studio sessions and tours; Clapton on guitar, keyboard player Bobby Whitlock, drummer Jim Gordon, and bassist Carl Radle. With the exception of Slowhand, of course, it was an all-American combo, and it reinvigorated the guitarman with a heartbeat of rollicking Southern R&B.

But all supergroups have their kryptonite. With Cream and Blind Faith, it was the usual battle of personalities and “artistic differences.” With Derek and the Dominos, it was a taste for opiates and other assorted drugs. The band lived too fast and died too young.

Along the way, though, it proved its powers. The two-LP Layla and Other Assorted Love Songs was recognized by fans as an instant classic – even though the title song took years to become the quintessential rock hit it is today.

After the album’s release, the band hit the road, touring the U.S. and U.K. Another album was planned, and a session in 1971 recorded before it was aborted. Burned out, Clapton abandoned the group and went into hiding. The legend of Derek and the Dominos never died, however. The band’s story was ripe to be cast into rock mythology – especially the tale behind the song “Layla.” Today, “Layla” is on the verge of being an over-played pop tune of which even the most diehard fans grow weary. It’s a shame, as the song began as a heartfelt lament on Clapton’s unrequited love for George Harrison’s wife, Pattie Boyd. Based on a seventh-century Arabian tale by Persian poet Nizami, it was perhaps Clapton’s masterpiece, and still is.

Added to that mythos was one of the greatest guitar licks of all time. Clapton admits he was ﬂoundering in ﬁnishing the composition when in walked Duane Allman, on leave from touring with the up-and-coming Allman Brothers Band. Recasting an old Albert King riff from the tune “There is Nothing I Can Do if You Leave Me Here to Cry,” Allman rolled out the ﬂeet-ﬁngered “Layla” lick. Guitar heroics would arguably never be the same.

To celebrate the original LP’s 40th Anniversary, Polydor has reissued the album in two versions: a two-CD Deluxe Edition and the boxed Super Deluxe Edition with four CDs, two LPs, and a DVD. The Deluxe luxe Edition includes a session outtake of Clapton and Allman jamming on “Mean Old World”; the unreleased ’71 sessions; four songs from the band’s sole TV appearance on “The Johnny Cash Show” in 1970, including Clapton’s jam with Carl Perkins; the two-track single produced by Phil Spector in ’70 that was almost instantly pulled. Plus there’s a great booklet penned by rock historian Ashley Kahn that’s probably worth the cost of the set alone.

The Super Deluxe Edition includes all this and more; the original album in both digital and vinyl form, a DVD with “The Johnny Cash Show” episode, reproduction tickets, a Stratocaster pickguard featuring the cover painting, and an expanded booklet.