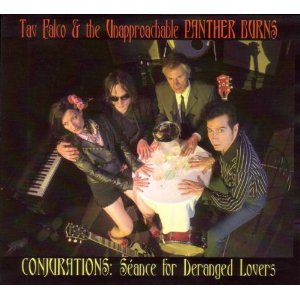 “Unapproachable” is right. “Indescribable” may also be justified. Just like the myriad musics of Memphis, from where Tav Falco hails, his longtime band Panther Burns remains a fascinating and ongoing conundrum.

The band was named for a Mississippi Delta town where a marauding panther was trapped in a thicket and burned. The cries of that big cat echo on down through time in Panther Burns’ music.

Falco started the band in 1979, inspired equally by deep Delta blues and old-time country, beat poetry and surrealist theater, Howlin’ Wolf, Charlie Feathers, the Cramps, and one-time band member Alex Chilton. It was a wide-ranging, inspired background – all spiced by a generous sense of humor.

Relocating to Europe, Falco has kept the music alive while adding new influences, including Parisian
café music and Argentine tango. Conjurations is his latest, recorded “… in a secret studio in Saint Germaindes-Prés in Paris,” as Falco teases. The current iteration of the band includes drummer Giovana Pirrorno, guitarist Grégoire Cat, and bassist Laurent Lanouzière along with guest harpsichordist Bertrand Burgalat and Olivier Manoury on bandoneon.