Nearly every musician who plays popular music – be it soul, R&B, pop, or the others – has been influenced by Donald “Duck” Dunn. And certainly, every person who has listened to a radio since 1961 has heard his playing.

After his childhood friends Steve Cropper and Charlie Freeman started spending less time playing baseball with him and more time playing guitars together, Dunn grabbed a bass; his first was a Kay electric he ran through a Silvertone amp. Before long, however, he upgraded to one of the Fenders he oogled in the window of a music store in his home town of Memphis. A fan of Hank Ballard, Ray Charles, the 5 Royales and the like, he was self-taught, and took to playing with relative ease. While in high school, the three young men, along with drummer Terry Johnson, formed The Royal Spades. Shortly after graduating, they were signed to a local record label, for which they changed the band’s name to The Mar-Keys and recorded the 1961 hit “Last Night.” Shortly after, Dunn left the band when he was asked to join the big band fronted by saxophonist Ben Branch. In ’62, he was recruited by Cropper to play in the Stax Records rhythm section and also became a member of Booker T. & the MG’s.

Modest about his abilities, Dunn used his Fender to develop a tone and style unheard of in the days of the “doghouse” upright. Clear and articulate, his approach redefined the role of the bass; where the upright was used primarily to render “walking” lines, Dunn and other electric players changed pop music by adopting a more-syncopated style, more akin to a second/complementary rhythm guitar. His form applied an identity to the music the band made as it backed various Stax Records artists, with a feel many musicians today equate simply with doing it right. And regardless of the song or whether it had him playing in the pocket, just “on top” of, or just behind the beat, there was a physical element to Dunn’s style, applied with pronounced body English.

Through most of his career, Dunn played a ’58 Precision that became his trademark. Finished in sunburst and with an anodized pickguard, through the decades, it took on various accoutrements that set it apart, visually.

“There are places in the body and pickguard where dad dug out wood or wore down the metal of the pickguard,” said Dunn’s son, Jeff, who now cares for his father’s instruments. “The round sticker is the Gort character from The Day The Earth Stood Still, which was adopted by Creedence Clearwater Revival as backstage passes. He applied the Duck sticker years ago. The Blues Brothers sticker went on in the early ’80s.”

Dunn had retired the bass for fear some sort of misfortune would befall it at a gig or on the road – but there were exceptions. “Neil Young did persuade him to take it on tour, as Neil promised the techs would look after it,” said Jeff. The instrument was actually his second Precision; in old photos, he is seen with one with a rosewood fretboard. “That one, the story goes, went down in the plane crash with Otis Redding, as dad had loaned it to Otis’ bassist.”

Dunn’s first amp of choice for studio work was an Ampeg B-15, but, “The one I really wanted – which everybody wanted – was a (Fender) Bassman,” he told VG’s Willie Moseley in a 2006 interview. “And I got a piggyback version, but I never liked it much. In ’67, I got a Kustom tuck-and-roll.”

Dunn’s varied career included working with guitarists Mike Bloomfield, Duane Allman, Clapton, and he was there when John Belushi and Dan Ackroyd took a “Saturday Night Live” skit and converted it to a legitimate musical act and feature film – The Blue Brothers. Though the skit (which employed the show’s house band) was farcical in nature, the group (which included Dunn and Cropper) produced serious renditions of blues songs and had a major hit in ’78 with its cover of Sam & Dave’s “Soul Man.”

“I was kind of hesitant to do [The Blues Brothers], but my wife talked me into it, and other than Booker’s band, that’s the most-fun band I’ve ever been in,” Dunn said in ’06.

From 1983 to ’86, Dunn backed Clapton live and in the studio for two albums, Money and Cigarettes and Behind the Sun.

“Of course, many instruments came and went over the years,” Jeff Dunn said of his father’s gear. “If he had held on to them all, there would have been 30 instruments in his collection. A few I remember were a Rickenbacker 4001, a Gibson Grabber, and all the basses in Hard Rock Cafes across the globe.”

Dunn died while touring with Stax! Live, a package featuring Eddie Floyd and the MG’s, which also included longtime friend and bandmate, Cropper. 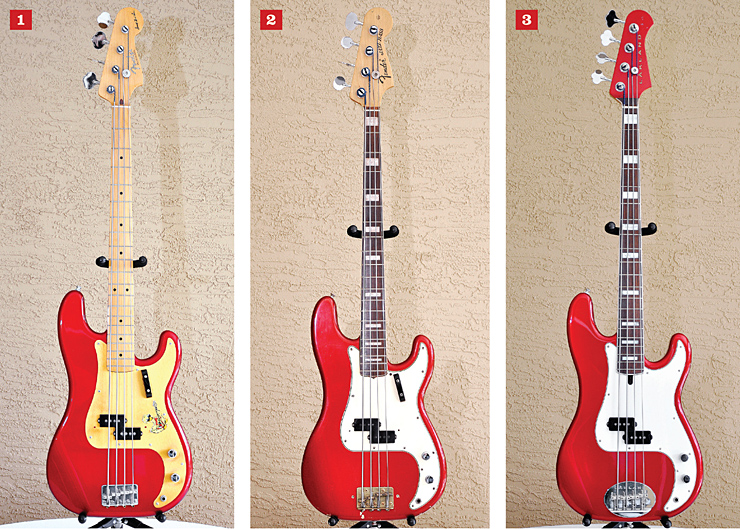 1) Fender Duck Dunn signature bass with serial number 0001. He played this in the film Blues Brothers 2000.
2) Dunn played this ’66 Fender Precision onscreen during the Holiday Inn/Murph and the Magitones scene in the 1980 film The Blues Brothers. The word “Demo” is stamped on the back of its body and on the original neck, which Dunn later replaced with a Jazz Bass neck. The instrument served as the basis for Dunn’s Fender signature model and inspired the later Lakland models.
3) Over the last several years, Dunn mostly played this Lakland signature model. “It has his favorite Labella flatwounds and will remain exactly as is,” said Jeff Dunn. “He played it only hours before he passed; it was still in tune when we got it back from Japan, where he played his last show.” 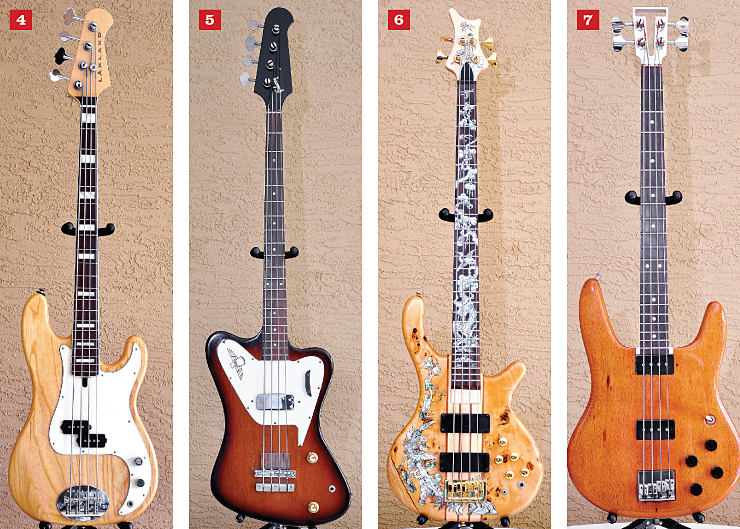 4) The prototype Dunn signature model by Lakland.
5) This Gibson Thunderbird was a gift to Dunn from Cliff Williams, bassist for AC/DC.
6) This heavily inlaid custom bass was a gift to Dunn from Steve Cropper. “It’s something I know Duck would never buy for himself – he just wasn’t into fancy stuff. So I got it for him. I had been looking at a PRS Dragon, which at the time was around $25,000 – just a bit out of my price range (laughs)! But this reminded me of it.” Jeff Dunn recalls that his dad often sat with it at home. “It plays great and has an active EQ,” he said.
7) Dunn received this Travis Bean in the ’70s as a gift from Steve Cropper.

This article originally appeared in VG April 2013 issue. All copyrights are by the author and Vintage Guitar magazine. Unauthorized replication or use is strictly prohibited.