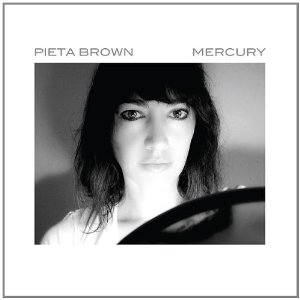 Put two great guitar players like Bo Ramsey and Richard Bennett together with one of the best songwriters to appear in the past decade, and there’s a chance you’ll get a great record. That’s exactly what happened with Mercury.

Ramsey, who co-produced with Brown, ﬁlls the songs with subtle, trebly sounds that add texture to each song. Veteran Nashville producer and guitarist Bennett adds chiming guitars along with some very tasteful lap steel throughout. And Brown’s songs all revolve around her acoustic. When the three lock in, it’s a seminar on how to play with other musicians.

Lyrically, Brown has trimmed things down from her previous efforts. But that hasn’t hurt the songs. It’s a term not to be thrown around loosely, but when you hear her lyrics, her stunningly gorgeous voice, with the music, it’s almost mystical. Making all of this even more unlikely, the record was cut in three days! Folk and country are the key inﬂuences. With Ramsey’s electric ﬁlls and Brown’s voice, “Be With You” is a song of pure yearning, mixing innocence and world weariness. The blues make an appearance too on “Butterﬂy Blues,” with Bennett’s haunting resonator darting around the vocals. Like most of the music on the record, the guitars on that cut are intertwined beautifully, creating an orchestral feel. There’s the occasional nod to rock, as on the rockabilly-ﬂavored “I’m Gone,” featuring a rough and ready Brown and a short and sweet solo by Bennett. When Pieta fan Mark Knopﬂer guests on the blues stomp “So Many Miles,” his solo ﬁts in perfectly.

Pieta Brown is a star in the true sense of the word, and Mercury should push that perception forward.