G&L Climax (serial number B025855) in Emerald Blue finish. Carve on the back of the Climax.Photos: Bill Ingalls Jr. Instruments courtesy of Naffaz Skota (Climax) and Ryan Cass (LB-100).

In its first decade, G&L – the solidbody instrument maker created by Leo Fender after his departure from the legendary company he first founded – thrived on innovations like the Magnetic Field Design (MFD) pickup. Its first bass, the L-1000 (“Bass Space” December ’03 and July ’06) was a passive single-pickup instrument Leo considered an improvement over his own legendary Fender Precision.

In Leo’s time with G&L, the company produced numerous other basses, including models with active electronics, futuristic body styles, etc. Following his death in 1991, G&L was sold to the audio technology company BBE Sound. As it turned out, the first new G&L models introduced by BBE ownership were based on a combination of marketing and a nod to the aesthetics of classic models associated with Leo.

Introduced in ’93, the Climax and LB-100 (initially called the Legacy until it was discovered the name infringed on a patent) were quite different from each other, just as their respective forebears were. The Climax, with its solitary pickup located near the bridge, bore a distinct resemblance to the Sting Ray bass Leo designed during a brief association with Music Man, while the LB-100 was a near-clone of the Fender Precision. Both had a 34″ scale on a maple neck with a 71/2″ neck radius on a maple or rosewood fretboard. One interesting similarity involves the headstock silhouette; while it had the standard G&L “barb” opposite the posts for the D and G strings, the “hook” near the company logo was new (and more Fender-like); the same portion of the headstock on earlier G&L bass models was rounded.

While the basses have different fretboard woods, both have pearl dot inlay (black pearl on the LB-100’s maple board), 21 frets, and their bodies join the neck at the 16th fret on the bass side, 20th fret on the treble side. Both have the massive G&L bridge with locking saddles. 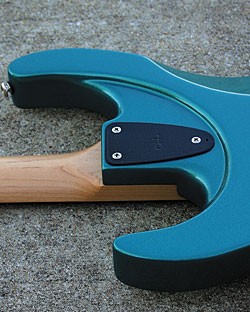 While the bodies (usually poplar, alder, or ash) are the same width (123/4″), the more-modern Climax has sleeker cutaway horns and sharper edges, while the LB-100 body maintains a traditional profile and edge shapes. One unique feature of the Climax is a 1/4″-deep recess around the neckplate.

The pickup on the Climax is an eight-pole MFD, and its 9-volt circuitry is controlled by two mini-toggle switches (Active/Passive and Preamp On/Off). Control knobs were found for Volume, Treble, and Bass. The passive LB-100 has what company literature calls an offset “split-coil vintage” pickup and standard Volume and Tone controls. The Climax was available in G&L’s standard or Premier finishes, while the LB-100 was offered only in standard finishes.

Ultimately, both models were relatively short-lived. The Climax was discontinued circa 1996, but was succeeded by the L-1500, which has a fretboard measuring 13/4″ at the nut, and six-bolt neck attachment. The LB-100 hung around until 2000.

There’s little debate over whether the Climax and LB-100 emulated Leo’s goundbreaking Fender models. And while they weren’t long-lived, they offer an appropriate historical tip of the hat to the memory of a guitar-manufacturing legend.


Special thanks to Paul Bechtoldt, author of G&L: Leo’s Legacy
This article originally appeared in VG‘s September 2009 issue. All copyrights are by the author and Vintage Guitar magazine. Unauthorized replication or use is strictly prohibited.