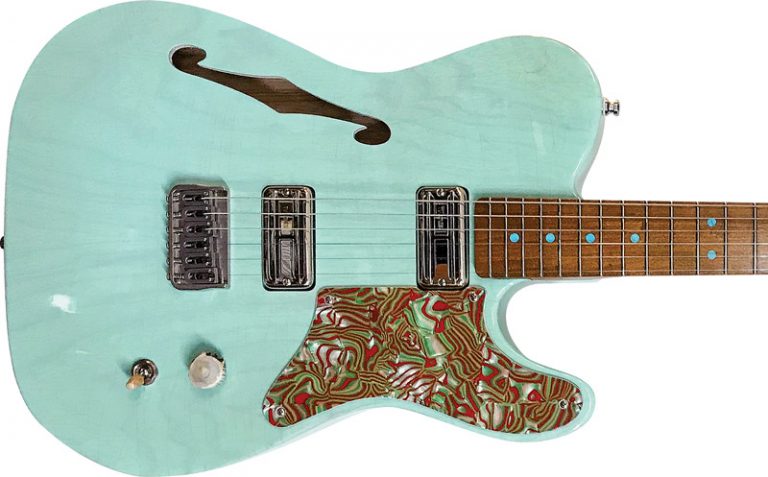 Slamo Guitars may not have yet achieved the name recognition of certain others, but Frank Silano has been building guitars under the radar for about 10 years.

Silano got his start at a music store in New York, where he began assembling bodies and necks made by others before moving on to dissect Gibson and Fender instruments. He worked his way through other brands until he was confident enough to build from scratch. The semi-hollow Turquoise Cabronita is one of his first production models.

The Cabronita’s lightweight swamp ash body is a familiar shape with a nicely cut sound hole. The neck is roasted maple with turquoise stone markers that pop on the dark fretboard, comfortably shaped to what Silano calls the “Clapton V,” with a 10″-16″ compound radius, 22 Jescar 55090 stainless-steel frets, and a nut carved from deer antler. The locking gear tuners and bridge are Hipshot and the psychedelic, custom pickguard is a extremely cool.

The Turquoise Cabronita’s simple control layout has a Volume knob (also carved from antler) and three-way toggle. The pickups are TV Jones Super’Trons, infamously underpowered but faithful replicas of those Gretsch pickups of yesteryear. Indeed, TV Jones Super’Trons usually fall in the 4.0-4.8k resistance range, but that’s not necessarily a bad thing, unless you want over-the-top output; that’s not this guitar’s strong suit.

The tasteful, lightly checked body is finished in aged nitrocellulose lacquer. Silano favors guitars with a mild relic treatment – the small blemish here and there are in good taste, like a “closet classic” that has been well-played but also given proper care.

The neck sports a hand-rubbed oil and wax finish with no stickiness. This is an extremely comfortable neck in every way. The headstock has one string tree and a decal featuring a coiled snake as part of the Slamo logo. The psychedelic-inspired, custom-cut pickguard is another extremely cool feature. A black Tolex hardshell case completes the package.

Strapped on, the Turquoise Cabronita is light and well-balanced. Plugged into an 18-watt Class A amp, it offered characteristic twang sans the dreaded “ice pick” effect. The Super’Trons, with steel blades replacing pole screws, were bright and clear, and string response was extremely balanced. The bridge was characteristically hot with maximum cut, while the neck was naturally warmer, perhaps with a bit less output. Together, the pickups delivered an even response that would work well in many styles of music. While the neck pickup doesn’t exactly go into jazz territory, with appropriate EQ, it could pass muster.

In terms of playability, the Turquoise Cabronita feels great. Chord shapes are easy, intonation is spot on, and string-bending is a breeze. And it stays in tune – an important attribute for any working guitarist.

Slamo’s Turquoise Cabronita is a commendable debut for a new guitar builder, and one that could easily find favor with guitarists looking for something eminently playable and tasteful with its unique appointments. – Bob Cianci