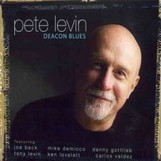 Levin is a keyboard specialist who for the past few decades has played with the best in the business, including Paul Simon, Miles Davis, John Scofield, Robbie Robertson, David Sanborn, and plenty of others. On this set he concentrates on Hammond organ and lines up two of his favorite guitarists to simulate an old organ trio. Joe Beck is one of the real giants of fusion, and has made fine records. He’s an incredible player, as his five cuts here attest. His comping and be-bop attitude help Levin translate Steely Dan’s “Deacon Blues” into a hard swinger. “Uptown” is highlighted by minor-key soloing with octaves bouncing off the wall. If you want an idea of how good he is, harmonically, check out “Mean to Me,” where he mixes incredible chord soloing with single lines in a way most guitarists would only dream about. And Levin turns his original “Might Have Been” into a vehicle for Beck to show off a bluesy side that remains melodic.

The other guitarist is Mike Demicco, whose wonderfully imaginative playing helps turn the Beach Boys’ classic “Sail On Sailor” into a natural adaptation. Demicco’s original “Eclipse” is a hard bopper that finds him playing around the changes about as well as anyone. It’s the perfect demonstration of chops. He also shows his ballad skills on Erik Satie’s “First Gymnopedie.”

Overall, this is a hard-driving set that features Levin, his brother, Tony, on bass, the two guitarists, and drummer Danny Gottlieb in a relaxed session that lets everyone show their skills.