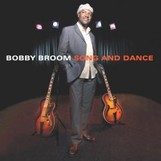 When he was 25, Bobby Broom was picked by jazz legend Kenny Burrell to be part of his Jazz Guitar Band, whose stint at New York’s Village Vanguard resulted in two albums. By then, Broom had moved from his native New York to Chicago and already logged sessions with Dizzy Gillespie, Stanley Turrentine, and Sonny Rollins.

He later held down a five-year stint with Dr. John, and reunited with Rollins for last year’s stellar Sonny Please, but Song And Dance is only his sixth solo album in the 26 years since his debut, Clean Sweep.

Choosing a trio format, with bassist Dennis Carroll and drummer Kobie Watkins, Broom kicks off the proceedings with a swinging take on the Beatles’ “Can’t Buy Me Love,” in the great tradition of jazzers reinterpreting pop standards. The tone from his Hofner Jazzica arch-top is warm, but still has plenty of definition, as illustrated on another pop cover, “Where Is The Love?”

Burrell’s influence is evident, but Broom’s biggest hero is probably George Benson, whose swinging phrasing and fanciful side can be felt on an uptempo jam on the Little Rascals’ theme, “Good Old Days,” of all things.

Broom’s originals blend into the program nicely, particularly the easy swing of “Coming Home.” But even on material that’s been done every which way – whether an evergreen like Charlie Chaplin’s “Smile” or Leon Russell’s (and the Carpenters’) ’70s hit “Superstar” – Broom’s arrangements are fresh and inventive. And Jim Webb’s “Wichita Lineman” provides an especially abundant palette for Broom’s explorations.

Hopefully, Broom can tear himself away from session work to continue on this path with a follow-up soon.

This article originally appeared in VG’s Jun. ’07 issue. All copyrights are by the author and Vintage Guitar magazine. Unauthorized replication or use is strictly prohibited.