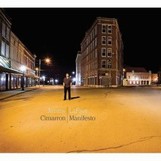 Jimmy La Fave joins other Texas singer/songwriters such as Guy Clark, Jimmie Dale Gilmore, and Townes Van Zandt in his ability to evoke the feelings and images of America hidden behind superhighways and shopping malls.

And his physical abilities are matched by his songwriting skills. His song “Car Outside” evokes visions of restlessness and remorse bundled in bittersweet melody. Covers of Donovan Leitch’s “Catch the Wind,” Bob Dylan’s “Not Dark Yet,” and Joe South’s “Walk a Mile in My Shoes” join nine originals, and a simple measure of La Fave’s songwriting is that his own work measures up against the likes of Bob Dylan. La Fave’s song, “Home Once Again” strikes just as deep an emotional chord as Dylan’s composition.

In a world chock full of artifice and illusion, it’s refreshing to discover new music that gets back to the basics. If you’re ready for music that embraces traditional values such as emotional honesty and lyrical style, give Jimmy La Fave a listen.