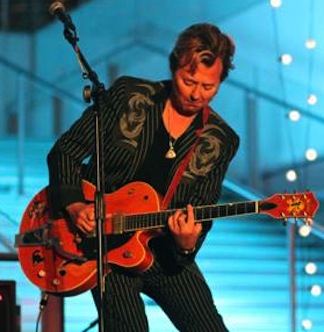 Brian Setzer recently donated a replica of his 1959 Gretsch 6120 to the Smithsonian’s National Museum of American History. The renowned original was used during the ’80s heyday of the Stray Cats, when he personalized it by mounting dice (taken from his Monopoly board game) on two of its Tone pots and added stickers depicting a black cat, skull and crossbones, and a pin-up girl. Those touches were duplicated on the replica, which was built in 2006 by Stephen Stern, master builder at Gretsch. At the Smithsonian, it joined Edward Van Halen’s “Frank 2,” Prince’s Yellow Cloud, and non-stringed instruments such as John Coltrane’s saxophone and Dizzy Gillespie’s trumpet.

“Brian Setzer is a prolific and distinctive contributor to American music,” said John Edward Hasse, curator of American music at the Smithsonian. “Proof of his legacy exists not only in the longevity of his career and in his lengthy discography, but also in his ability to cross musical boundaries.” To learn more, visit http://americanhistory.si.edu.