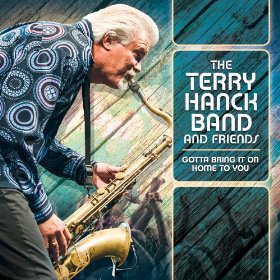 Many know saxophonist Terry Hanck from his years with Elvin Bishop. But those fortunate to live in the San Francisco area in the ’70s and ’80s also know Hanck as a great singer and front man, specifically with Grayson Street and the house band at Larry Blake’s (better known as the Rat Band).

Inevitably, this triple-threat (he’s also a fine songwriter) would form his own band. Gotta Bring It On Home To You, his seventh solo CD, carries the postscript “and friends.” One friend is co-producer Chris “Kid” Andersen, known for his work with Charlie Musselwhite and the Nightcats featuring Rick Estrin. Hanck discovered the guitar wiz in Norway and brought him to the States. Here, Andersen shares guitar duties with Hanck’s guitarist of 10 years, Johnny “Cat” Soubrand, along with cameos from Debbie Davies and Bob Welsh. Cat’s exaggerated vibrato on “Peace Of Mind” recalls Magic Sam.

Hanck has a big tenor tone like greats ranging from Joe Houston to Junior Walker, sometimes shooting into its upper register with ease before reaching still higher. He specializes in old-school R&B, soul ballads, jumpin’ blues, and, to quote one of his originals, “good, good rockin’.”