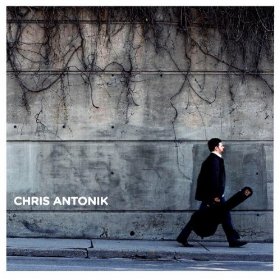 Blues guitarist Chris Antonik seems determined to prove the adage that every note counts. While his song structures are familiar, his playing keeps them from being cliche.

The opener, “More To Give,” is nothing fancy – just a ninth-chord funky blues. But Antonik’s punchy ﬁlls and his solo immediately show his innate ability to pick the right note at the right time; a minor-chord played during a key modulation keeps things more than interesting.

From minor-key slinkiness to pop/soul to shufﬂes, and even the prerequisite slow blues, the songs here cover the gamut. Antonik sings on just one cut, otherwise, vocals are handled by others, and if there’s a knock, it’s that the soul in their voices can’t match that in Antonik’s playing. On his take on “She’s a Burglar” – a song usually associated with Freddie King – Antonik spins a solo in and out of a bed laid by a killer horn section that pays tribute to King and helps show off his soulful playing.

This debut demonstrates Antonik is one to watch in the blues. He writes well and plays wonderfully.