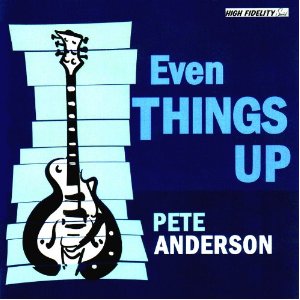 Pete Anderson needs little introduction as a guitar slinger and producer with sublime guitar taste. For his production work on albums with Dwight Yoakam from 1986 to 2003, he has taken home a Grammy while the records have gone multi-platinum, selling more than 25 million copies and counting.

While his guitar work with Yoakam was glorious, lowdown country music, on his own albums, Anderson
stretches out and lets go. Even Things Up continues in that tradition, but with a fine twist.

Here, Anderson returns to an early love, the blues. And just as he brought his tasteful licks to roots rock and alt-country, his guitar licks here show a deep understanding of the blues. Anderson was born in Detroit and grew up in a working-class family, eventually following his parents to an auto assembly-line job. That background informs his music.