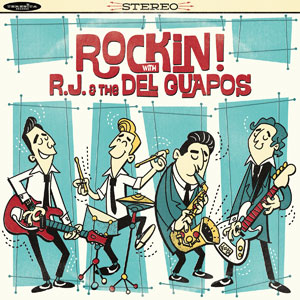 Guitarist/vocalist R.J. Ronquillo’s quartet utilizes three-fourths of the Panamericans, with him taking the place of Joao Erbetta. You can’t do much better than saxophonist Ron Dziubla, bassist Rob Douglas, and drummer Pete Curry – and they didn’t even have to leave their Pow Wow Fun Room studio. Voilà – they’re now the Del Guapos!

Ronquillo’s tone has bite, a touch of distortion, and plenty of reverb. “Bésame Mucho” seems to have made a comeback in the repertoires of guitarists with vintage ears, and Ronquillo and his whammy bar deliver a stellar take.

The instrumentals recall the craze that predated surf, while some of the vocals have a pachuko vibe à la Don & Dewey or the Premieres. “Shake” falls somewhere between the Champs’ “Tequila” and Bobby Parker’s “Watch Your Step,” and “Woo Girl” is essentially “Hound Dog.” But “Kristina” doesn’t just borrow from Little Richard’s “Lucille”; it is “Lucille.”

You’ll find yourself trying to place the songs that R.J.’s originals are reminiscent of. But if you’re going to cull from the oldies canon, mine the best, as Ronquillo does here. “Rockin!” – absolutely.